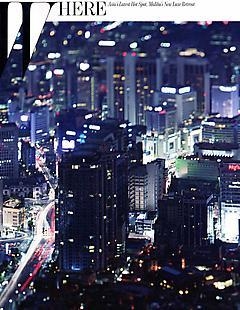 A new generation of artists, filmmakers, and fashionistas is remaking South Korea’s Capital in its own image.

If there is a city that can lay claim to the greatest number of art openings per square mile, it's Seoul. On a single evening during a recent trip, I managed to attend three such events, all on the same floor in the same building. At Gallery 2, a thirtysomething crowd sipped oversize bottles of Australian beer and took in the latest exhibition by the Korean Pop artist Lee Dongi, who breezed through the crowd drinking a chocolate-flavored vodka cooler. Next door, at Michael Schultz Gallery, was "Facade," a collection by abstract photographer Roland Fischer. And down the hall Gym Project was showing "The Strange World of Dorothy," which consisted of garden gnome-like statues of a fat, homely girl sharing a picnic with a cat on a gingham tablecloth. At $2,500, the works were a bargain compared with the vibrant Lee paintings, which reference Disney and Japanese ani7lle and go for as much as $20,000.

The galleries are situated in the sprawl of concrete and glass called Gangnam-gu, on the third floor of Nature Poem, an ultramodern low-rise designed by Mass Studies, the firm behind the Korea Pavilion at the 2010 Shanghai Expo. It opened three years ago, and at last count, 18 galleries called Nature Poem home, making it the art-world equivalent of a mini mall. On the north side of the Han River, another gallery scene is clustered in Sogyeok-dong, a neighborhood that many Koreans insist is even trendier than Gangnam. There, Artsonje Center was hosting a multimedia show, "The Educated Objects," by artist Kim Beom, featuring a 12-hour video of a rock being taught Korean poetry. Nearby, Arario Seoul exhibited portraits inspired by newspaper personal ads: "Hi Sugar, I have soft luscious lips and the voice of an angel, but when your [sic] looking into my baby blue eyes, and see my 36C-24-36, 5'5 and baby doll face it will be love at first sight so call me at 610-444-9774." The drawing next to it showed a haggard woman with long hair and big breasts in a bikini, and the effect was simultaneously funny, sad, mundane, depressing, and arrestingly, affectingly intimate.

The art scene is not Seoul's only scene. Fashion is also playing a part in the city's resurgence. Comme des Garcons just opened a massive sevenfloor flagship. Two years ago, 10 Corso Como, the art-concept store in Milan, debuted a branch in Seoul. (Its only other location is in Tokyo.) And every week or so, an up-and-coming local designer opens a boutique. Indeed, the Korean flowering of talent brings to mind the Japanese wave of the Eighties, when Rei Kawakubo, Issey Miyake, and Yohji Yamamoto revolutionized the fashion world. While there hasn't been a breakout star of that caliber, designers Juun J., Park Choon Moo, Soonjin Park, and Choi Bum Suk (the creative force behind men's wear brand General Idea) have already infiltrated New York and Paris.

The publishing world is eager to get in on the action too. Last year a magazine called Cabinet was launched in Seoul; written in both Korean and English, its debut issue contained articles about Belgian couturier Dries Van Noten and Tom Dixon, the British industrial designer. Following international hits such as The Host and The Chaser, Korean movie directors like Na Hong-jin are inking deals in Hollywood. And restaurants like the Kitchen Salvatore Cuomo, which just may serve the best woodfired pizza in Asia, are poaching chefs from Europe and Japan.

Creativity, in short, is boiling over. While the global recession has becalmed the world's great economies, the ancient yet breathtakingly modern city of Seoul is holding its coming-out party: Welcome to Asia's latest It city.

If this comes as news, join the club-it's also news to Koreans, who seem curiously oblivious to the transformation sweeping their capital. But here are the facts: South Korea now boasts the world's 15th-largest economy. As unemployment spiked all over the developed world last year, the country piled on 200,000 new jobs. And as the nation's former colonial overlord across the Sea of Japan (which Koreans would prefer you called the East Sea) seems destined to enter its third "lost decade" of microscopic economic growth, Korea's economy is expected to expand by nearly 6 percent this year.

Nowhere are signs of the South Korean Miracle more apparent than in Seoul. The city is in the midst of installing parks and grand boulevards. There are cafes springing up next to the Han River, which bisects the capital and which, only decades ago, was something akin to an open sewer. Big name architects, too, are remaking the city: Rem Koolhaas---who codesigned the world-class Leeum, Samsung Museum of Art, which opened in 2004-also designed the Prada Transformer, a building that has four radically different appearances. Skidmore, Owings & Merrill has broken ground on the Digital Media City Landmark Tower, which will be the tallest building in East Asia when it is topped off in 2014. And Zaha Hadid is in the process of turning a derelict section of downtown into a 900,OOO-square-foot megastrucrure comprising a shopping mall, a design museum, a library, and a seven-acre park with reflecting pools, lotus ponds, and bamboo groves.

Urban renewal started in 2003, when Lee Myung-bak, then Seoul's mayor and now South Korea's president, embarked on a plan to prettify one of the world's ugliest cities. But the roots of the city's renewal go back through more than 50 years of Korean history, when Seoul was shelled to rubble during the Korean War. It needed to be rebuilt from the ground up, and a generation of survivors dedicated themselves to doing just that. During the mid-Seventies, South Korea was actually poorer than the communist North and run by a military dictatorship that didn't take kindly to free thought. It became known for producing cheap textiles and knockoff electronics.

Over time, though, the government surrendered to the tide of modernity. By the late Eighties, restrictions on foreign travel were lifted, and the children of South Korea's wealthier families began attending prestigious American universities and developing a taste for the Western lifestyle. Political reforms soon followed, and with them cultural expansion. In 1995, Gwangju, the scene of a terrible government crackdown in the early Eighties, became the home of Asia's first contemporary art biennial.

What's happening is simply this: A generation that listens to iPods and wears Ivy League alumni T-shirts and that has only ever known democracy is taking the reins from its conformist, workaholic parents.

AS WITH OTHER rapidly evolving cultures, the people of Seoul are learning to live with their country's paradoxes. Consider personal appearance. Cheongdam-dong, a trendy neighborhood in Gangnam, is a shopper's paradise of international big-name labels and local boutiques. In adjacent Apgujeong-dong, cosmetic surgery clinics are as common as Starbucks franchises in midtown Manhattan. An ad in the subway showed a woman's body with the head of a potato being peeled to reveal smooth white flesh beneath a coarse exterior; the tagline read HAPPY REBIRTHDAY TO YOU. And yet walk around Seoul on any Friday night and you will not see standout alpha beauties. Gangnam Girls are not Seoul's answer to Tokyo's Harajuku Girls. They do not strut, sashay, parade, or wiggle. They are very well dressed, but only on second glance.

Seoul's car culture is similarly understated. Everybody drives everywhere-even distances that are eminently walkable. But as with the women of Seoul, Korean cars prefer not to draw attention to themselves. They seem to come in only three colors: white, silver, and-for the truly daring-black. (I didn't see a red car even at Gangnam's Ferrari dealership.) The key to conspicuous consumption in Seoul, apparently, is to be as inconspicuous as possible. One notable art collector I met told me that his favorite place to hang his most treasured works was "in storage."

But consumption, however inconspicuous, is still consumption, and in South Korea, contemporary Western art is still being bought at a steady clip-and at full price. Lee Bul worries about her country's appetite for "blue-chip" art, despite being herself a Korean blue-chip artist of international repute. (Two years ago she was given a solo exhibition at Paris's Fondation Cartier.) When I met Lee in her studio, she was wearing a mannish blue outfit-think chic Korean mechanic-and working on a baroque metal hanging sculpture. She described how becoming an artist in Korea used to mean "accepting hunger" and "being a loser." Lately, she said, some are striking it rich before they even turn 30. Lee then softened her voice and warned, "The apple always smells ripest just before it rots."

The Korean apple, I can report, is far from rotten, thanks in large part to artists like Lee; Do-Ho Suh, who presented "Blueprint," a translucent fabric facade of the town house where he lives in New York, at this year's Venice Architecture Biennale; and Bae Young-whan. Bae made a name for himself by taking found objects---say, an old wardrobe pulled from a house about to be demolished to make way for yet another toweringly ugly apartment block-and refashioning them into guitars. He is presently working with technical diagrams of guns and musical instruments. "Both are beautiful," he told me. "And when you see them together, it poses the question, Which would you rather produce?"

Guns, of course, are a central feature of Korean life. Seoul is a mere 40 miles from the demilitarized zone, or DMZ, beyond which resides one of the world's last great dictators, Kim Jong-il, an ailing crackpot with his finger on the nuclear trigger. One can't help but wonder if the dynamism of the South-the money, the fashion, the movies-is in some way a reaction to the insanity roosting farther north. But that is the kind of question only a foreigner would ask. If you float such theories past a Korean, she will laugh politely and tell you that South Koreans don't spend a single minute thinking about the North. And it appears to be true. My visit to Seoul coincided with the 60th anniversary of the start of the Korean War, and there was more grainy archival footage and survivor interviews on CNN International than on Korean TV:

What Koreans are thinking about is the future. And the faster they can get there, the better. A few days after visiting Bae's studio, I stepped inside another factory-fresh building, a recently remodeled mall called Doota, which houses boutiques selling stylish, reasonably priced clothing designed and made in Korea. Outside, tour buses disgorged throngs of Chinese and Japanese tourists.

I bought a short-sleeve shirt by a label called K1973, then rode the escalator back to the street and hailed the nearest taxi. The driver had the radio tuned to a show commemorating the war's anniversary; a woman in her 70s was recalling its terrible beginning. She was 13 on the day the fighting began and was rousted out of her house to join a long line of hungry refugees headed south. Accompanied by violins in a minor key, she reminisced about lost loved ones and those stranded on the wrong side of history, and her voice quavered. And then-just as the violins began their upward sweep, building toward the story's wrenching climax-the driver jabbed a buttom and changed the station. Upbeat Korean pop filled the air, and the lights over the Han sparked in the night.