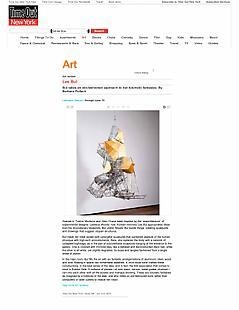 Bul takes an old-fashioned approach to her futuristic fantasies. Scenes in Twelve Monkeys and Alien 3 have been inspired by the "architecture of experimental designer Lebbeus Woods; now, Korean visionary Lee Bul appropriates ideas from his revolutionary blueprints. But unlike Woods, Bul builds things, creating sculptures and drawings that suggest utopian structures.

Bul made her initial splash with cyborglike sculptures that combined aspects of the human physique with high-tech accoutrements. Here, she replaces the body with a network of collapsed highways, as in the pair of polyurethane sculptures hanging at the entrance to the gallery. One is covered with mirrored tiles, like a deflated and deconstructed disco ball, while the other is all white, yet slightly degraded, its loops and tangles fashioned from a single sheet of plastic.

In the main room, Bul fills the air with six fantastic amalgamations of aluminum, steel, wood and wire, floating in space like homemade satellites. A child could have crafted these constructions, in the best sense of the idea, and in fact, the first association that comes to mind is Erector Sets. A collision of planes-of wire mesh, mirrors, metal grates, plywood-ram into each other with all the screws and mishaps showing. These are futuristic fantasies as imagined by a hobbyist of the past, one who relies on old-fashioned tools rather than computer laser cutters to realize her vision.