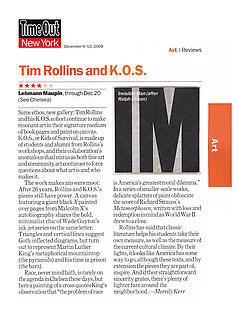 Same ethos, new gallery: Tim Rollins and his K.O.S. cohort continue to make resonant art in their signature medium of book pages and paint on canvas. K.O.S., or Kids of Survival, is made up of students and alumni from Rollins's workshops, and their collaboration's anomalous dual status as both fine art and community art continues to force questions about what art is and who makes it.

The work makes answers moot: After 26 years, Rollins and K.O.S.'s pieces still have power. A canvas featuring a giant black X painted over pages from Malcolm X's autobiography shares the bold, minimalist chic of Wade Guyton's ink-jet series on the same letter. Triangles and vertical lines suggest Goth-inflected diagrams, but turn out to represent Martin Luther King's metaphorical mountaintop (the pyramids) and his time in prison (the bars).

Race, never mind faith, is rarely on the agenda in Chelsea these days, but here a painting of a cross quotes King's observation that "the problem of race is America's greatest moral dilemma." In a series of smaller-scale works, delicate splatters of paint obfuscate the score of Richard Strauss's Metamorphosen, written with loss and redemption in mind as World War II drew to a close.

Rollins has said that classic literature helps his students take their own measure, as well as the measure of the current cultural climate. By their lights, it looks like America has some way to go, although these texts, and by extension the pieces they are part of, inspire. And if their straightforward sincerity grates, there's plenty of lighter fare around the neighborhood.