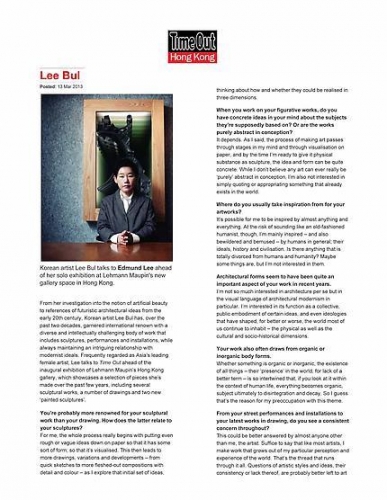 
From her investigation into the notion of artificial beauty to references of futuristic architectural ideas from the early 20th century, Korean artist Lee Bul has, over the past two decades, garnered international renown with a diverse and intellectually challenging body of work that includes sculptures, performances and installations, while always maintaining an intriguing relationship with modernist ideals. Frequently regarded as Asia’s leading female artist, Lee talks to Time Out ahead of the inaugural exhibition of Lehmann Maupin’s Hong Kong gallery, which showcases a selection of pieces she’s made over the past few years, including several sculptural works, a number of drawings and two new ‘painted sculptures’.

You’re probably more renowned for your sculptural work than your drawing. How does the latter relate to your sculptures?


For me, the whole process really begins with putting even rough or vague ideas down on paper so that it has some sort of form; so that it’s visualised. This then leads to more drawings, variations and developments – from quick sketches to more fleshed-out compositions with detail and colour – as I explore that initial set of ideas, thinking about how and whether they could be realised in three dimensions.

When you work on your figurative works, do you have concrete ideas in your mind about the subjects they’re supposedly based on? Or are the works purely abstract in conception?


It depends. As I said, the process of making art passes through stages in my mind and through visualisation on paper, and by the time I’m ready to give it physical substance as sculpture, the idea and form can be quite concrete. While I don’t believe any art can ever really be ‘purely’ abstract in conception, I’m also not interested in simply quoting or appropriating something that already exists in the world.

Where do you usually take inspiration from for your artworks?


It’s possible for me to be inspired by almost anything and everything. At the risk of sounding like an old-fashioned humanist, though, I’m mainly inspired – and also bewildered and bemused – by humans in general; their ideals, history and civilisation. Is there anything that is totally divorced from humans and humanity? Maybe some things are, but I’m not interested in them.

Architectural forms seem to have been quite an important aspect of your work in recent years.


I’m not so much interested in architecture per se but in the visual language of architectural modernism in particular. I’m interested in its function as a collective, public embodiment of certain ideas, and even ideologies that have shaped, for better or worse, the world most of us continue to inhabit – the physical as well as the cultural and socio-historical dimensions.


Whether something is organic or inorganic, the existence of all things – their ‘presence’ in the world, for lack of a better term – is so intertwined that, if you look at it within the context of human life, everything becomes organic, subject ultimately to disintegration and decay. So I guess that’s the reason for my preoccupation with this theme.

From your street performances and installations to your latest works in drawing, do you see a consistent concern throughout?


This could be better answered by almost anyone other than me, the artist. Suffice to say that like most artists, I make work that grows out of my particular perception and experience of the world. That’s the thread that runs through it all. Questions of artistic styles and ideas, their consistency or lack thereof, are probably better left to art critics. Someone once summed up my art as being about ‘beauty, corruption and decay’. That sounds about right.

You’ve previously spoken of the stereotypes that were associated with Asian female artists in the 1990s. Do you think the art world has matured since then?

As an artist, what stage of your career do you think you’re at?


What stage? It depends on who you ask, I guess. I like to think I’m always in the ‘hopeful’ stage, the stage just before the next new work that gives me creative satisfaction and, if I’m lucky, continued validation by the world beyond my studio.