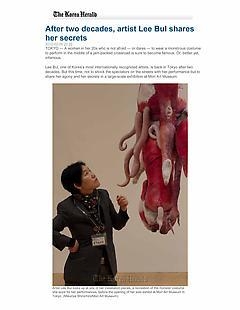 After Two Decades, Artist Lee Bul Shares Her Secrets
By Hwang You-mee
TOKYO - A woman in her 20s who is not afraid - or dares - to wear a monstrous costume to perform in the middle of a jam-packed crossroad is sure to become famous. Or, better yet, infamous.
Lee Bul, one of Korea’s most internationally recognized artists, is back in Tokyo after two decades. But this time, not to shock the spectators on the streets with her performance but to share her agony and her secrets in a large-scale exhibition at Mori Art Museum.
As the title “Lee Bul: From Me, Belongs to You Only” subtly suggests, the show reflects how, after spending 20 years struggling to express the anxiety, frustration, anger and disquiet about the unknown or the unreachable, Lee has come to terms with them, or herself - to a certain degree.
“It is a line from a letter my lover sent me several years ago,” said the artist at a press conference Friday. “It was a very challenging time for me as I was feeling overwhelmed, as if I were way in over my head with my works.”
But it reminded Lee that even though she might be disappointed with her life, she also had someone she could share it with, who understood her.
The audacious performer might have let go of her giddiness, as she has taken off the ugly, soft “sculptures.” But they are not forgotten. Rather, they have taken on lives of their own as the bizarre sculptures recreated afterward. Hanging ominously from the high ceilings of the museum, they welcome the visitors into Lee’s retrospective.
The artworks symbolize “her attempts to give shape to the unknown, the intangible things such as ideals, beauty, immortality or uncertainty about the future. Hope, desire, feelings and emotions that cannot be expressed,” explained Kataoka Mami, chief curator of the museum. “They show how Lee focuses on things that don’t have forms,” she added.
The exhibition goes on to present how the artist has labored with the ideas and emotions: first expressing them mainly with performances using her own body, and then with sculptures and installations ? or something similar to those in a traditional sense ? using bodily motifs.
The “Cyborg” and “Anagram” series are certainly more aesthetically pleasing but Lee being Lee, there are limbs missing or connected randomly to the torso, all of which are headless. These twisted representations of the pursuit of the ideal body evolve into a more grand scale, as her vision moves on to architectural or urban planning models.
Born in 1964 to leftist parents who were banished from society over guilt by association, Lee vented and visualized her frustration and yearnings with references to utopian thought of the 20th century, the modern and contemporary history of Korea lying beneath.
But as the last and the latest artwork indicates, “she is once again confronting her own body, her perception, and her personal emotions,” said the chief curator.
The new work, “The Secret Sharer,” dominates a spacious room that boasts a sweeping view of this sprawling city. At first it is hard to tell what this huge, shimmering object is. Take several steps closer and then you can make out, albeit barely, that it resembles a dog. Spewing.
The dog, an homage to her pet of 17 years, pours out the time, the memories the artist shared with him in the form of acrylic, plastic, glass and beads, all gleaming with the light onto the floor.
“When asked to hold this mid-career retrospective, I was very scared. I didn’t know what to make of it. But I thought maybe, like this dog, if I vomited everything and shared it with everyone, or communicated with someone on a personal level, that might be something,” said Lee of the piece created for this show.
“It will not be an answer, or even an alternative to what I have been working on. But I can say that talking to someone about how we are still trying, even when we are not getting any closer to the ideals, the utopia, that is what my life is for,” she added.
The exhibition “Lee Bul: From Me, Belongs to You Only” runs through May 27. For more information, visit www.mori.art.museum.