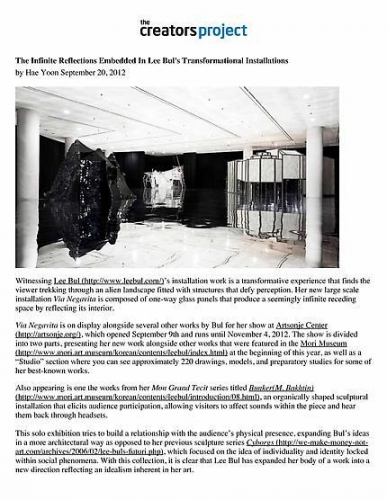 
Witnessing Lee Bul’s installation work is a transformative experience that finds the viewer trekking through an alien landscape fitted with structures that defy perception. Her new large scale installation Via Negativa is composed of one-way glass panels that produce a seemingly infinite receding space by reflecting its interior.

Via Negativa is on display alongside several other works by Bul for her show at Artsonje Center, which opened September 9th and runs until November 4, 2012. The show is divided into two parts, presenting her new work alongside other works that were featured in the Mori Museum at the beginning of this year, as well as a “Studio” section where you can see approximately 220 drawings, models, and preparatory studies for some of her best-known works.


Also appearing is one the works from her Mon Grand Recit series titled Bunker(M. Bakhtin), an organically shaped sculptural installation that elicits audience participation, allowing visitors to affect sounds within the piece and hear them back through headsets.

This solo exhibition tries to build a relationship with the audience’s physical presence, expanding Bul’s ideas in a more architectural way as opposed to her previous sculpture series Cyborgs, which focused on the idea of individuality and identity locked within social phenomena. With this collection, it is clear that Lee Bul has expanded her body of a work into a new direction reflecting an idealism inherent in her art.