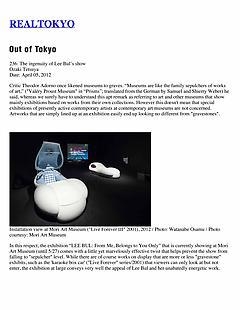 Out of Tokyo: The Ingenuity of Lee Bul’s Show
By Ozaki Tetsuya

Critic Theodor Adorno once likened museums to graves. “Museums are like the family sepulchers of works of art,” ("Valéry Proust Museum" in “Prisms”; translated from the German by Samuel and Shierry Weber) he said, whereas we surely have to understand this apt remark as referring to art and other museums that show mainly exhibitions based on works from their own collections. However this doesn't mean that special exhibitions of presently active contemporary artists at contemporary art museums are not concerned. Artworks that are simply lined up at an exhibition easily end up looking no different from "gravestones".

In this respect, the exhibition “LEE BUL: From Me, Belongs to You Only” that is currently showing at Mori Art Museum (until 5/27) comes with a little yet marvelously effective twist that helps prevent the show from falling to "sepulcher" level. While there are of course works on display that are more or less "gravestone" exhibits, such as the 'karaoke box car' ("Live Forever" series/2001) that viewers can only look at but not enter, the exhibition at large conveys very well the appeal of Lee Bul and her unabatedly energetic work.

Lee Bul is a Seoul-resident female artist born in 1964. Her career started in the late 1980s around a core of performance works, incorporating monster-like costumes the artist further developed into the concept of oddly shaped soft sculptures that, along with drawings, earned her a worldwide reputation as one of Korea’s premier artists. Her works are characterized by shapes and lines comparable to those of Hans Bellmer or robot animations in the 1980s and later, and have been showcased at the Venice Biennale and Rodin Gallery among others. Her style is different from mediocre feminism, yet dominated by highly sensual forms that emphasize notions of life, sexuality and femininity.

Lee participated in numerous group exhibitions in Japan, and did quite a few solo shows as well. The 21st Century Museum of Contemporary Art, Kanazawa, is one museum that has been collecting and exhibiting her works, so Japanese art fans should be well familiar with her name. Nonetheless, up to this point there weren't any retrospective exhibitions of her work of a scale as large as this. As opportunities to view art from our neighboring country in general are pretty rare, the fact that this exhibition was realized alone deserves recognition.

Lee Bul’s works have a striking visual impact, and clearly illustrate the artist’s individual sense of shape that remains largely unchanged from her debut up to the present. For those unfamiliar with Korean historical, political and social backgrounds, however, the themes hidden in each work aren't necessarily easy to figure out. I wouldn't call the show at Mori Art Museum a perfectly considerate attempt in this respect, but as far as historical and social conditions in our neighboring (Asian) country are concerned, I'd expect people to study such things independently beforehand in the first place. Even without serious research, quick-witted viewers will (perhaps) be able to obtain a great deal of background knowledge just by watching a few Korean movies or TV dramas. Anyway, the following contains some facts that may spoil the fun for those who haven't seen the show yet, so in that case I recommend you skip this part and read it once you're back from the museum.

In a nutshell, the exhibition’s special feat is ‘The Studio’, a space set up along the way around the displays. A fleeting look suggests a "replica of the artist’s atelier" kind of display as it is featured in exhibitions every now and then. Countless plans and sketches are put up row upon row on the walls, while some models of plastic works are placed on working tables. In addition, there are about 30 supposedly life-sized dog "sculptures" made from wood, cloth, leather, plaster, clay, metal and various other materials, that are particularly eye-catching. Some of them are loosely modeled using newspapers and packing tape, others have exquisitely patterned surfaces, or were assembled from small polygonal shapes. They are all differently colored, and similar only in their general shape and size.

The question that comes to mind first has to be, "What on earth are these?!?" There doesn't seem to be an explicit answer, but considering that we are in "The Studio" and thus not in a regular exhibition hall, it is quite clear that these must be prototypes born during a creative trial-and-error process through which the artist was aiming to determine the final shape of one or several works. The next question that pops up is obvious. "What does the final work(s) look like then?"

The answer is waiting in the last exhibition hall. Here the visitor can, if only briefly, retroactively track back (part of) the creative process that exists only in the artist’s mind. The work exhibited in this hall is titled "The Secret Sharer", and here visitors can in fact (partly) share secrets on a different level. It is of course also possible to enjoy guessing the connections between sketches, models, and the other works.

It may be just a little gimmick. It may be taken as "too much of a good thing" because there are already quite a few uniquely powerful works on display at once. However amidst all those "sepulcher" exhibitions that Adorno refers to, this design is an important detail, as it functions as an activator that saves the exhibits from turning into mere gravestones.

We have to keep in mind that the Studio is not a faithful reproduction of an existing atelier, but a pseudo replica with fictional elements. According to an explanatory caption, “In the Studio section of this exhibition visitors can catch a glimpse both of the process leading up to this during which Lee Bul crosses between the world of ideas and reality, and of the world of her imagination in a recreation of her studio space.” This however can – and probably should – be understood as an artwork within the artwork that is carefully executed in both a physical and conceptual sense.

As is the case with other distinguished contemporary artists, Lee Bul’s artistic universe isn't a simple one. Her creations are multi-layered, and her messages polysemous, but when trying to paraphrase the mysterious title "From Me, Belongs to You Only", and condense the continuous theme of her work into a short line, one would get to something like "from inside to outside". In my view, the "Studio" setting (as an artwork in itself) worked brilliantly as a mechanism for the viewer to filter out this general theme by way of visual and haptic perception, rather than having it explained verbally. After all, we don't want to see bone-dry, motionless corpses of the past, but witness the endeavors of artists that are alive and kicking in our time.