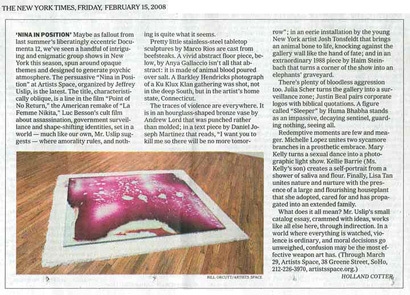 NY Times
February 15, 2008
'NINA IN POSITION'
By HOLLAND COTTER
'NINA IN POSITION' Maybe as fallout from last summer's liberatingly eccentric Documenta 12, we've seen a handful of intriguing and enigmatic group shows in New York this season, spun around opaque themes and designed to generate psychic atmosphere. The persuasive ''Nina in Position'' at Artists Space, organized by Jeffrey Uslip, is the latest. The title, characteristically oblique, is a line in the film ''Point of No Return,'' the American remake of ''La Femme Nikita,'' Luc Besson's cult film about assassination, government surveillance and shape-shifting identities, set in a world -- much like our own, Mr. Uslip suggests -- where amorality rules, and nothing is quite what it seems.
Pretty little stainless-steel tabletop sculptures by Marco Rios are cast from beefsteaks. A vivid abstract floor piece, below, by Anya Gallaccio isn't all that abstract: it is made of animal blood poured over salt. A Barkley Hendricks photograph of a Ku Klux Klan gathering was shot, not in the deep South, but in the artist's home state, Connecticut.

The traces of violence are everywhere. It is in an hourglass-shaped bronze vase by Andrew Lord that was punched rather than molded; in a text piece by Daniel Joseph Martinez that reads, ''I want you to kill me so there will be no more tomorrow''; in an eerie installation by the young New York artist Josh Tonsfeldt that brings an animal bone to life, knocking against the gallery wall like the hand of fate; and in an extraordinary 1988 piece by Haim Steinbach that turns a corner of the show into an elephants' graveyard.
There's plenty of bloodless aggression too. Julia Scher turns the gallery into a surveillance zone; Justin Beal pairs corporate logos with biblical quotations. A figure called ''Sleeper'' by Huma Bhabha stands as an impassive, decaying sentinel, guarding nothing, seeing all.
Redemptive moments are few and meager. Michelle Lopez unites two sycamore branches in a prosthetic embrace. Mary Kelly turns a sexual dance into a photographic light show. Kellie Barrie (Ms. Kelly's son) creates a self-portrait from a shower of saliva and flour. Finally, Lisa Tan unites nature and nurture with the presence of a large and flourishing houseplant that she adopted, cared for and has propagated into an extended family.
What does it all mean? Mr. Uslip's small catalog essay, crammed with ideas, works like all else here, through indirection. In a world where everything is watched, violence is ordinary, and moral decisions go unweighed, confusion may be the most effective weapon art has. (Through March 29, Artists Space, 38 Greene Street, SoHo, 212-226-3970, artistsspace.org.) HOLLAND COTTER