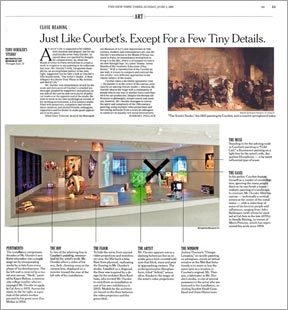 ART: CLOSE READING; Just Like Courbet's. Except For a Few Tiny Details.
By BARBARA POLLACK

AN artist's life is supposed to be riddled with isolation and despair, but for the multimedia artist Tony Oursler, inspired ideas are sparked by thoughtful collaborations. So, when the Musée d'Orsay in Paris invited him to create a work in response to any painting in its collection last year, Mr. Oursler's wife, Jacqueline Humphries, an accomplished painter in her own right, suggested that he take a look at Courbet's 1855 masterwork, ''The Artist's Studio: A Real Allegory of a Seven-Year Phase in My Artistic and Moral Life.''

Mr. Oursler was immediately struck by the scale and intricacies of Courbet's crowded studioscape, peopled by supporters and patrons on one side of the canvas and caricatures of political leaders on the opposite end of the studio. He went to work on his own mythological version of his working-environment, a 21st-century studio filled with projectors, computers and surveillance cameras, and invited friends, colleagues, supporters and his dealer to make guest appearances in his piece.

When Gary Tinterow, head of the Metropolitan Museum of Art's new department of 19th-century, modern and contemporary art, saw Mr. Oursler's installation at the Musée d'Orsay museum in Paris, he immediately invited him to bring it to the Met, where a revamped version is on view through Sept. 18, called ''Studio: Seven Months of My Aesthetic Education (Plus Some).'' With a reproduction of the Courbet on one wall, it is easy to compare and contrast the two artists' very different approaches to the classic subject of the studio.

Courbet takes a decidedly egocentric view -- the painter is at the center of the canvas, overseen by an adoring female model -- whereas Mr. Oursler shares the stage with a community of people who in one way or another have contributed to his art production. Despite the obvious differences in philosophy, temperament and medium, however, Mr. Oursler manages to convey the spirit and complexity of the 19th-century painting, using multiple video projections and borrowing artworks from a score of colleagues to construct an equally rich social environment.