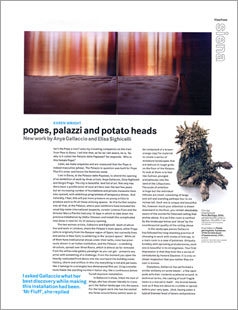 Isn't the Pope a man? asks my travelling companion on the train from Pisa to Siena. I tell him that, as far as I am aware, he is. 'So why is it called the Palazzo delle Papesse?' he responds. 'Who is this female Pope?'

Later, we make enquiries and are reassured that the Pope is indeed masculine (phew). The Palazzo in question was built for Pope Pius II's sister and hence the feminine name.

I am in Siena, at the Palazzo delle Papesse, to attend the opening of an exhibition of work by three artists: Anya Gallaccio, Elisa Sighicelli and Sergio Prego. The city is beautiful. And full of art. Not only has there been a proliferation of local art fairs over the last few years but an increasing number of foundations and private museums have also opened, with ambitious programmes of temporary shows. And naturally, I fear, this will put more pressure on young artists to produce work to fill all these enticing spaces. As if to further empha-sise all that, at the Palazzo, where past exhibitors have included the usual big-name international suspects, curator Lorenzo Fuss and the director Marco Piertini had only 12 days in which to take down the previous installation by Olafur Eliasson and install this complicated new show in time for its 22 January opening.

The two woman artists, Gallaccio and Sighicelli (both of whom live and work in London), share the Palazzo's main space, while Prego (who is originally from the Basque region of Spain, but currently lives and works in New York) is exhibiting in the 'project space'. While all of them have institutional shows under their belts, none has previ-ously shown in an Italian institution, and the Palazzo - a rambling structure, spread over three floors, which is almost as far removed from the white-cube gallery paradigm as you can get - presents any artist with something of a challenge. From the moment you open the heavily rusticated front doors into the courtyard the building oozes history, charm and artifice; in this city everything is old and yet looks like it belongs to a strangely two-dimensional film set. Crisp crenella-tions frame the startling northern Italian sky, like a continuous James Turrell skyroom installation.

In Gallaccio's show, titled the look of things, she has chosen literally to trans-port the Italian landscape into the space. For the largest work she has harvested the fields around Siena (which seem to be composed of a brown-orange clay) for material to create a series of miniature landscapes that are laid out in rough grids on the floor of the Palazzo.
To look at them is to feel like Gulliver, plunged precipitously into the land of the Lilliputians. The scale of ambition is huge but the individual hillocks are small, consisting of twigs and soil and standing perhaps four to six inches tall. Each one is unique and beautiful. Yet, however much your attention is drawn downward to the floor, you remain absolutely aware of the wonderful frescoed ceiling that arches above, It is as if the room is earthed by the landscape below and 'skied' by the counterpuntal quality of the ceiling above.

In the landscape pieces Gallaccio has followed her long-standing practice of choosing to work with states of entropy. In a main room is a case of potatoes. Uniquely knobbly with sprouting protuberances, each one is beautiful in its strangeness. Your first impression is that they look like a series of caricatures by Honoré Daumier. It is only on closer inspection that you realise they are cast in bronze.

Elsewhere, Gallaccio has performed a similar alchemy on some beans - a few open pods with their contents scattered around. In technical terms, the casting of such fragile items is a marvel in itself - the bronze beans look as if they are about to crumble or sprout before your very eyes. (And, having eaten a typical Sienese feast of beans and potatoes the night before, I was particularly touched and amused by the works.) Indeed, this is a particularly appropriate locale in which to view this kind of work: not far away in Carrara and Pietrasanta the traditions of bravura technique allow local artisans to give marble the properties of fabric.

At the end of the hall, a curtain of local apples threaded on coarse cord swings and perfumes the air with their unmistakeable scent. Apples have been the subject of previ-ous Gallaccio works but this installation is rougher and more touching for me than some of her earlier bronze pieces. On a stand in the corner is a bottle of eau de vie with a hand-painted label, making us aware once more of the process of making. Beautiful in the same way as Cornelia Parker's hanging pieces, they have an earthiness and rusticness that seems to echo this brooding palazzo.

At the previous night's dinner I asked Gallaccio what her best discovery while making this installation had been. 'Mr Fluff', she replied. He is the owner of a factory that makes thread out of used clothes. In the process he has made large amounts of fluff which now fill a corner gallery at the Palazzo. Gallaccio has made rolls out of it; they are bent and stooped - anonymous characters in a silent play. The colours of the linty figures echo the birds and geometric patterns of the ceiling frescos.

Descending one floor you enter a very different interior. Sighicelli (originally from Turin) works with photographs on backlit light boxes, using a very specific technique which blanks out the light in certain parts of the picture in such a way that only a carefully chosen section emerges. This show, titled Sottovoce, has been inspired by the fantastic Sienese paintings in the Pinacoteca, near the Palazzo. Sighicelli has selected works from the collection and, rather than simply photo-graphing them in their entirety, has chosen details which are then blown up to larger-than-life size. The resulting works echo the flatness, simplicity and artifice that characterise the wonderful painters in the school of Siena. 'Here is a Sesseta, here isa Benvenuto di Giovanni, here is a Beccafumi,' she explains to me, turning the pages of her quickly produced catalogue. Her intention is to draw the viewer to details they might well not have noticed while looking at the central part of the paintings.

Sienese painting is not the subject of all Sighicelli's works. Interiors, gloomy and brooding in dark greys and blacks, are again enlivened by strips of light. There is also a work based on Nicola Bettoli's Teatro Reglo in Turin which was also the subject of her first video work, Baudelaire, which was based on the Frenchman's obser-vation that the best part of going to the opera is seeing the chande-liers light up.

The next day, on a flight to New York, I tune into Enduring Love, the recent film based on Ian McEwan's novel. In a prominent scene the two main protagonists are in a white cube space peering at some works of art. They are, coincidentally, bronze apple trees by Anya Gallaccio. They look so different here, translated onto the screen and in the dazzlingly bright spaces of a conventional gallery. The work in Siena is special because it is connected - engaged with the architec-ture and the landscape of a particular place.

Work by Anya Gallaccio, Sergio Prego and Elisa Sighicelli is on show at the Palazzo delle Papesse Centro Arte Contemporanea, Siena, until 2 May