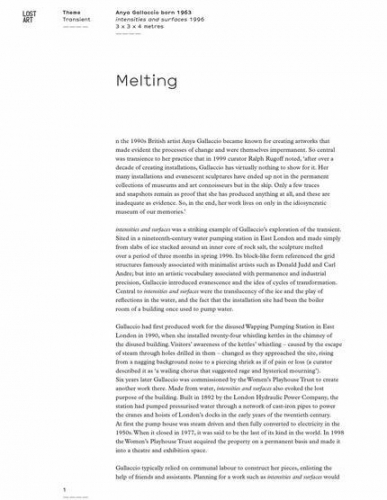 
In the 1990s British artist Anya Gallaccio became known for creating artworks that made evident the processes of change and were themselves impermanent. So central was transience to her practice that in 1999 curator Ralph Rugoff noted, ‘after over a decade of creating installations, Gallaccio has virtually nothing to show for it. Her many installations and evanescent sculptures have ended up not in the permanent collections of museums and art connoisseurs but in the skip. Only a few traces and snapshots remain as proof that she has produced anything at all, and these are inadequate as evidence. So, in the end, her work lives on only in the idiosyncratic museum of our memories.’


intensities and surfaces was a striking example of Gallaccio’s exploration of the transient. Sited in a nineteenth-century water pumping station in East London and made simply from slabs of ice stacked around an inner core of rock salt, the sculpture melted over a period of three months in spring 1996. Its block-like form referenced the grid structures famously associated with minimalist artists such as Donald Judd and Carl Andre; but into an artistic vocabulary associated with permanence and industrial precision, Gallaccio introduced evanescence and the idea of cycles of transformation. Central to intensities and surfaces were the translucency of the ice and the play of reflections in the water, and the fact that the installation site had been the boiler room of a building once used to pump water.


Gallaccio had first produced work for the disused Wapping Pumping Station in East London in 1990, when she installed twenty-four whistling kettles in the chimney of the disused building. Visitors’ awareness of the kettles’ whistling – caused by the escape of steam through holes drilled in them – changed as they approached the site, rising from a nagging background noise to a piercing shriek as if of pain or loss (a curator described it as ‘a wailing chorus that suggested rage and hysterical mourning’).


Six years later Gallaccio was commissioned by the Women’s Playhouse Trust to create another work there. Made from water, intensities and surfaces also evoked the lost purpose of the building. Built in 1892 by the London Hydraulic Power Company, the station had pumped pressurised water through a network of cast-iron pipes to power the cranes and hoists of London’s docks in the early years of the twentieth century.
At first the pump house was steam driven and then fully converted to electricity in the 1950s. When it closed in 1977, it was said to be the last of its kind in the world. In 1998 the Women’s Playhouse Trust acquired the property on a permanent basis and made it into a theatre and exhibition space.


Gallaccio typically relied on communal labour to construct her pieces, enlisting the help of friends and assistants. Planning for a work such as intensities and surfaces would be detailed but there would always be some element of surprise and, if necessary, improvisation or pragmatic acceptance of deviations, in the making of a site-based sculpture. Gallaccio later recalled:


The ice piece at Wapping was made in one day. One of the slabs cracked when we were installing it and I left it broken. I try to accept the inconsistencies of the processes and materials that I use.We took the scaffolding down the day of the opening, so that was the first time I saw the object in the space. I had three hours to get my head round the idea that this was my piece of work.


intensities and surfaces melted not only because of the ambient temperature but also because hidden at its core was a block of rock salt.The salt helped corrode the structure in unpredictable ways, creating dramatic changes and shapes reminiscent of weathered rocks. The pristine beauty of the original block was lost, but instead the work offered a play of changing reflections in the widening pool of water of the boiler room floor.The decay and rot of once conventionally beautiful materials were hallmarks of a number of Gallaccio’s works of the 1990s. As curator Ralph Rugoff noted in 1999, this was a risky gambit: ‘In a media-driven culture which continually bombards us with perfect images and images of perfection, physical reality frequently seems underwhelming, and many of us may initially respond to such work with disappointment and peevishly blame the artist.’ In its latter stages, intensities and surfaces had changed beyond recognition and in places absorbed dirt from the boiler room floor.The title of the work seemed to imply that what mattered was not the original form of the block of ice but rather the dramatic processes of its mutation, or what Rugoff called the ‘quietly outrageous metamorphoses in process under our noses and under our feet’. Today, a few photographs remain to tell us what the work looked like, but significantly Gallaccio refused herself to make and sell photographs of her pieces: they were at best partial records of what was essentially an encounter. Photographs, Rugoff wrote, ‘fail to capture what engages and interests us in that encounter – the emotional and sensory responses triggered by the work’s material attributes, and our own active role unfolding and engineering her art’s latent narratives.’


In the 1990s Gallaccio presented the processes of transformation through decay in a number of works involving flowers. For preserve ‘beauty’ she first created a window display of a type of red gerbera known as ‘Beauty’, hanging 800 flowers between a glass panel and the window of a London gallery in 1991. Initially a very striking sight, the work rapidly changed, as the flowers dried and then rotted, and as mould grew: the grid-like form – associated within the history of modern art with minimalism – was turned into a site of uncontrolled natural processes. She later remade the work and in 2003 produced a group of four panels involving approximately 2,000 flowers. Unlike other site-specific installations, the flower pieces combined transience with repeatability: owners did not have to struggle to preserve the works but rather, with the artist’s permission and set of instructions, could remake them.


Her subject was still the ‘changing state of things and concern with the fleeting nature of possession’, but with the concept of easy repeatability she had found a way of allowing her works to enact repeated loss and absence. This solution perhaps marked the end of her interest in transient works, as Gallaccio turned to working with more long-lasting, traditional materials such as bronze and ceramic, even while continuing to focus on the theme of nature and change.