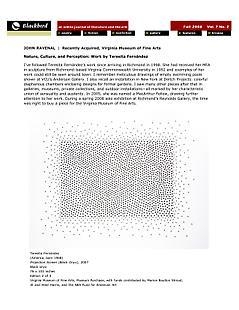 I've followed Teresita Fernández's work since arriving in Richmond in 1998. She had received her MFA in sculpture from Richmond-based Virginia Commonwealth University in 1992 and examples of her work could still be seen around town. I remember meticulous drawings of empty swimming pools shown at VCU's Anderson Gallery. I also recall an installation in New York at Deitch Projects: colorful diaphanous chambers enclosing designs for formal gardens. I saw many other pieces after that in galleries, museums, private collections, and outdoor installations—all marked by her characteristic union of sensuality and austerity. In 2005, she was named a MacArthur Fellow, drawing further attention to her work. During a spring 2008 solo exhibition at Richmond's Reynolds Gallery, the time was right to buy a piece for the Virginia Museum of Fine Arts.
I chose Projection Screen (Black Onyx), a six-and-half foot by eight-and-a-half foot loosely configured rectangle made of hundreds of polished black onyx semi-spheres. The piece includes two sizes of onyx, each fixed to the wall by a magnetic strip on its back and arranged according to a set plan that exists in template form, so that all future installations will follow the same pattern.

The detail below gives a better sense of the material.

Fernández's work concerns the broad realms of nature, culture, and perception. More specifically, she takes elemental natural phenomenon—fire, water, ice, smoke—as her starting point to make highly distilled allusions that invoke both the thing in itself and blatantly artificial representations of these phenomenon. Below are two recent works.
For Fire, Fernández stretched two layers of dyed silk threads between metal rings and suspended the piece just above the ground. Viewers walking around it experience a changing moiré pattern that recalls the flickering of flames.

For Ink Mirror (Landscape), Fernández embedded a slab of highly polished black fiberglass in a cast marble base. As in much of her work, she adapted the basic geometric forms and pristine clarity of Minimalist sculpture to allude to the cultural fabrication of "nature," in this case a snowy nighttime landscape. The capacity of the ink mirror to simultaneously absorb and reflect further signals Fernández's interest in vision as a subject and owes in part to her study of the Claude glass.

Named after French 17th-century painter Claude Lorrain, this dark mirror aided painters in translating the landscape into two-dimensional representations. With the device in hand, an artist would turn away from the landscape he or she sought to depict, the better to see its essential features, as the darkened piece of glass reflected only the highlights and deepest shadows of the scene while absorbing the middle tones. The idea of turning away from nature to clarify one's vision of it fascinated Fernández and inspired her to explore the use of dark reflective materials, including black onyx.

Projection Screen continues the interplay of representation, abstraction, vision, and the world by referring to a more contemporary device for transforming perception into image: film. The work's central geometric form evokes the proportions of the cinematic screen. But its disintegration at the edges into a nebula of black dots conveys an emptiness akin to a constellation of black holes. This emptiness reminds me of Hiroshi Sugimoto's photographs of art deco movie houses with blank screens—shot in the dark in extended exposures that coincide in length with the duration of an entire film.

The initial layout of Projection Screen was determined intuitively—each semi-sphere placed one by one like the strokes in a drawing—thus it left room for inconsistencies and unpredictability. Distinct patterns emerge among the dots—fan shapes, wavy lines, triangles—but just as quickly disappear, allowing the viewer to perceive both order and chaos.

The work's indeterminate borders and shifting patterns suggests a continually expanding universe, a quality that reminds me of Vija Celmins's paintings of night skies, which offer viewers a similar oscillation between the illusion of deep space and awareness of the work's materiality.

This heightened perceptual experience also recalls the experience of looking at late dark paintings by Mark Rothko and Ad Reinhardt. As in those closely hued fields of black and near black, Projection Screen reveals itself slowly through prolonged encounter while ultimately resisting any fixed image.

The central role played by the material itself in creating this experience has its precedents in Process Art. Robert Morris's felt pieces exemplify this move during the 1960s and '70s toward unconventional materials, eccentric forms, and improvisational processes. Their composition is made by simple cuts in large pieces of industrial felt and the exertion of gravity when they're hung on the wall. Fernández's onyx wall piece effects a similar reliance on the physical properties of the material and an easily discernable compositional strategy.

Sol LeWitt's work provides a final comparison and signals the way that several generations of younger artists have built upon the foundation of Conceptual Art. In his sculptures, wall drawings, and works on paper, LeWitt posited simple concepts that paradoxically yielded complex results. The open cube sculpture below is a straightforward tower of stacked cubes, each larger by one unit than the one above, and all based on the single module at top. The viewer's experience, however, is far from simple. Moving around the piece offers a kaleidoscopic vision of order and chaos with grids and columns aligning and dissipating as one looks into and through the network of white crosspieces.

In her own work, Fernández expands this visual complexity beyond the phenomenological and intellectual concerns of her predecessors. Her interest in optical uncertainty and in disrupting visual fields serves as a way to collapse artifice and nature into a prismatic experience, which in turn reveals nature as a fabrication of culture. Fernández's Projection Screen invites viewers to project onto its surface, completing its meaning through the act of looking. Like the Claude glass, it's a device for heightening sense perception, and, also like the Claude glass, it distances viewers from its subjects as much as bringing them closer.

Teresita Fernández was born in 1968 in Miami, Florida and lives and works in Brooklyn, New York. Fernández received her BFA from Florida International University in Miami, Florida, in 1990 and her MFA from Virginia Commonwealth University in Richmond, Virginia in 1992. She has received many awards and fellowships, including a MacArthur Fellowship (2005), a Guggenheim Fellowship (2003), and the Louis Comfort Tiffany Biennial Competition Award (1999). Her work has been exhibited at the Centro de Arte Contemporáneo de Málaga, Spain (2005), the Miami Museum of Art (2002), and the Museum of Modern Art , New York (2001).

The Virginia Museum of Fine Arts, located in Richmond, Virginia, is undergoing a significant expansion that will double the gallery space and triple the area for special exhibitions. The museum remains open during the construction and the expanded museum is slated to open in early 2010.