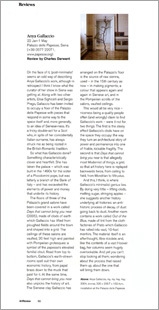 On the face of it, 'post-minimalist' seems an odd way of describing Anya Gallaccio's work, although in retrospect I think I know what the curator of her show in Siena was getting at Along with two other artists, Elisa Sighicelli and Sergio Prego, Gallaccio has been invited to occupy a floor of the Palazzo delle Papesse with pieces that respond in some way to the space itself and, more generally, to an idea of Sienese-ness. It's a tricky double-act for a Scot who, in spite of her coincidentally Italian surname, has always struck me as being rooted in the British Romantic tradition.

So what has Gallaccio done? Something characteristically clever and heartfelt She has taken the palace - which was built in the 1490s for the sister of a Piccolomini pope, but was latterly a branch of the Bank of Italy - and has excavated the elements of power and money that underlie its history.

The floors of three of the Palazzo's grand salone have been covered in a work called Days that cannot bring you near (2005), made of clods of earth which Gallaccio has lifted from ploughed fields around the town and shaped into a grid. The ceilings of these salons are vaulted, 20 feet high and painted with Pompeiian grotesques: a symbol of the papesse's elevated familial clout. Read from top to bottom, Gallaccio's earth-strewn rooms spell out their own economic history, from papal brass down to the muck that paid for it. At the same time, Days that cannot bring you near also unpicks the history of art. The Sienese clay Gallaccio has arranged on the Palazzo's floor is the source of raw sienna, used - in the 15th century as now - in making pigments; a colour that appears again and again in Sienese art, and in the Pompeiian scrolls of the salons, vaulted ceilings.

This would all be very nice - niceness being a quality people often (and wrongly) claim to find Gallaccio's work - were it not for two things. The first is the steely effect Gallaccio's clods have on the space they occupy: the way they turn an architectural story of power and permanence into one of friable, kickable fragility. The second is that Days that cannot bring you near is that allegedly most Modernist of things, a grid; so that art history here is replayed backwards twice, from ceiling to field, from Mondrian to Vitruvius.

And this, I think, is where Gallaccio's minimalist genius lies. By doing very little - lifting clods, melting sugar, stringing apples - she suggests another history underlying all histories: an anti-historic process of decay, of dust going back to dust Another room contains a work called Out of the Blue, made of lint from the cloth factories of Prato which Gallaccio has rolled into vast, 10-foot menhirs. The material itself is an afterthought, fibra riciclata; and, like the contents of a vast Hoover bag, her columns seem hugely overlookable. And yet you can't stop looking at them; wondering about the process that raised them up, about the one that will bring them down.