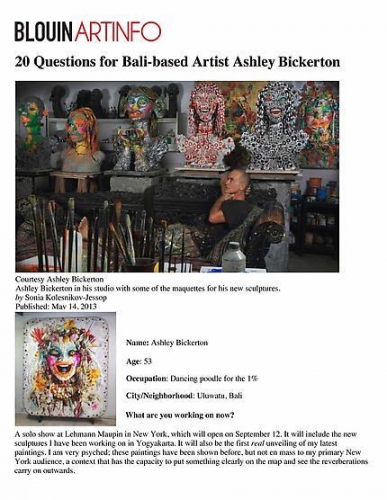 
Occupation: Dancing poodle for the 1%


What are you working on now?

A solo show at Lehmann Maupin in New York, which will open on September 12. It will include the new sculptures I have been working on in Yogyakarta. It will also be the first real unveiling of my latest paintings. I am very psyched; these paintings have been shown before, but not en mass to my primary New York audience, a context that has the capacity to put something clearly on the map and see the reverberations carry on outwards.


Tell me more about the new sculptures?

Basically, I had been creating models for the paintings that I was making only to be photographed then left to rot. In irony, half the people who have seen those models have liked them better than the paintings, and have pushed me to realize them as distinct objects. Many estimable folks, including Melissa Chiu and a group visiting from the Asia Society in New York, insisted I needed to realize them as artworks in and of themselves, and not just a prop in the construction of the paintings. I readily agreed, but felt they would be next to impossible to build as they were so detailed with many perishable objects attached including flowers, fruit, cigarettes, insects, and any number of unstable, rusting metals. It was not until Jasdeep Sandhu of Gajah Gallery stopped by and said "I can build these" that the dream became a real possibility.


How has the collaboration developed?

Jasdeep told me he had recently set up the Yogya Art  Lab under the helm of the legendary Richard Hungerford, and with the aid of a deeply talented team of Yogyakarta  artists. I knew it would be extremely difficult, but if it was going to be done anywhere on the planet, Yogya was the place. I have to give Jasdeep the credit for great vision and certainly no shortage of guts, he saw it right away and did not hesitate.


These new sculptures are quite complex materially. They are primarily in aluminum, with added hair, resin, oil paint, cement, and several other materials. With all their elaborate detailing, they are proving to be exceptionally difficult works, but hopefully, and with some measure of good luck, we will have the first one or two ready for Art Basel in Hong Kong. The Yogya team is working around the clock with conference calls to Bali, and I am on standby to run over the minute they call to finish it all. We are certainly working under the blade of a falling guillotine, but remain warily optimistic this will all land according to plan. Fingers crossed.

What was the original inspiration for the faces?


As far as the faces go, I had for years been using human models. Over time I started applying more and more, and thicker and thicker paint in their make up till they were almost dripping, and then distorting them more and more in Photoshop before printing them on canvas to be "re-painted." I realized that I could take it all a huge step further if I got rid of human models entirely and built the models myself from clay. In order to get just the right relationship between anatomical accuracy and creative/emotional abandon, I had the component parts like the mouths, ears, eyeballs, and noses made according to very specific specifications by my team here in Bali. These component parts were based on any number of sources, from, art history, fashion, popular media, cultural anthropology, and even porn. Where it became fun was when I put it all together. The rule was, if it looked right, STOP! No overworking anything. I had to hit just the right emotional pitch. So where the brutality mixed with the carefully pre-made component eyeballs, noses etc., it created the effect that fits squarely into my comfort zone: real control over certain 'pegged givens,' all held together by a much harder and faster set of wild circumstances that give the whole thing its effect, and ultimately its meaning.

Not a few people still say they are a bit scary, but heck, I am really trying to make straight up beauty. I am now forced to understand that my ideas of beauty and sexuality are a bit wayward from the mainstream of human feeling. Oh well!


Where are you finding ideas for your work these days?

I am assaulting the same old fortress from yet another devious angle, using yet even more ingenious weaponry. It’s naturally a Sisyphean dynamic.


What's the most indispensable item in your studio?

Wherever and however it surprises me.

Anywhere the crowd in Hong Kong drags me.


What's the last show that you saw?

A wonderful show by the young up and coming Balinese artist Made Bayak at Ari's Warung here in Bali.


What's the last show that surprised you?

Anselm Kiefer at White Cube in Hong Kong. The math simply didn’t add up, just the sheer number of movements it would have taken to make those paintings, divided by the time it took to make them, boggled credulity. And right now, only a few short months later, he has two massive shows opening simultaneously in Paris. How he can maintain such a deft touch at such a dizzying pace, I have no idea, but I need to exhale. I have gotten in arguments with respected friends who thought the show to be pandering with it obviously tacked on Mao's for the Asian audience. I responded that that might well be the case if I allowed myself to pull back far enough, but I was lost in the close up details and cadences of the greatest torch singer alive in art today. Seeing nearly all art as I do on the Internet, and as such, always dealing with the conceptual overview from afar, to be lost in the physical presence of these works all of a sudden, I needed to suspend the judgment, and allow myself to be washed away in the siren's song of his unparalleled voice. Arguing with my friends afterward about the merits or lack thereof of this show, made me think long and hard about exactly how an artwork is successful or not.


What's the weirdest thing you ever saw happen in a museum or gallery?


Do you collect anything?


What's the last artwork you purchased?

‘Election Day Serenade’ by Pops Mohamed on itunes, and before that an S. Teddy Darmawan sculpture.


What work of art do you wish you owned?

If I could own one single object in this world, it would have to be an Yves Klein IKB ‘sponge painting’.


What would you do to get it?

I have none. But I am haunted by the echoing sound of heels in a large empty gallery.


What international art destination do you most want to visit?


Who are under-appreciated artists you think people should know about?


Who's your favorite living artist?

It would probably be a writer. But if I had to name an art world figure, I’d be happy with Paul McCarthy.

‘Rimbaud in Java: The Lost Voyage’ by Jamie James


What are your hobbies?