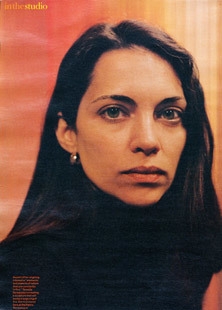 In the Studio: Through her stylized, minimalist abstractions, Teresita Fernández taps into the natural world of our imagination
BY STEPHEN WALLS

ABOUT A YEAR AND A HALF AGO, the Fabric Workshop and Museum in Philadelphia invited Teresita Fernández to discuss a possible collaboration. The not-for-profit organization is known for working with artists on challenging projects involving unconventional materials (often other than fabric), and Fernández came with an intriguing proposal: She wanted to create a sculpture that would evoke a large, dramatic ring of fire.

Her primary concern was that the piece capture the luminous transparency and flickering incandescence of actual flames, and the staff at the workshop set about coming up with ideas to realize Fernández's vision. They first made samples using colored Plexiglas rods, then tried nylon threads strung over molded Plexiglas, followed by nylon threads embedded incastresin.The problem was, in each case the result was too solid, too literal—it looked and felt too much like what it was. For Fernández, the samples simply weren't evocative enough.

"I try to give my three-dimensional works an ephemeral quality," says the 36-year-old, Brooklyn-based artist. "That's where I become really interested in materials. How little can I do with this thing and still have it transcend its material? How can I invent something with it?"

A breakthrough came when Mary Anne Friel, a project coordinator at the Fabric Workshop, happened to take a tour of the Queens, New York, weaving facility of the luxury textiles maker Scalamandré. There, on loom after loom, she saw gorgeous warps of colored silks, and the delicate spacing between the strands gave them just the kind of transparency Fernándezwas looking for. Over the next several months, the artist and specialists at the Fabric Workshop experimented with ways of applying dye to silk threads and hanging them to get the right effect.

During a visit to the workshop in mid-January, they were still sorting out a numberof issues and Fernández was tweaking the colors—which had to be painstakingly applied with an airbrush and stencils, fixed in a steamer and then washed. But the basic structure had been resolved. The work will be composed of two concentric circles of hanging silk strands, dyed in rich gradations of reds, oranges and yellows. Measuring 8 feet high and 12 feet in diameter, the piece will be suspended just barely off the floor. The artist acknowledges that even she doesn't know exactly how the work will look until it is completed, but the intended effect is clear enough. As one moves around the piece, light and color will shift in a kind of dazzling, rhythmic dance. Imagine an erupting volcano.

The work is the centerpiece of Fernández's upcoming show at the Lehmann Maupin gallery, from April15 through May 14—her first solo outing in New York in three years. As the artist explains, this sculpture is part of her "ongoing interest in elements and aspects of nature that are universal but constantly in flux." She has previously done pieces that relate to clouds, foliage, sand, and most prominently, water, The show will also include a floor sculpture, with a colored surface covered in glass beads, that suggests lava; at least one wall sculpture composed of small glass cubes in fiery hues; and a new series of large-scale drawings inspired by smoke, composed of thousands of small circles in ink overlaid with pale washes and rings of color.

Fernández does not make art that is about nature, at least not in a representational or narrative sense. Rather, she taps into our ideas and often romanticized notions of nature, which are shaped as much by images and memory as by direct experience. "Certain images and spaces exist in our mind's eye in a much more palpable way than they do in real life," she says. "Our ideas about things are much stronger than the things themselves, in the same way that dreams can be much more powerful than real experiences."

Her stylized, minimalist abstractions are really about the natural world of our imagination, and her use of synthetic materials highlights the artifice. "I'm not trying to illustrate or re-create anything," she says. "I create a catalyst to put you in a place where you're thinking about something else."

The artist emphasizes that there is no political, moral or personal agenda in her choice of subjects. "I'm really not that interested in nature," she says with a laugh. "I'm interested in our construction of it."

The Miami-born Fernández lives in a row house in Brooklyn with her husband and two sons, ages 3 and 1. Her garagelike studio, a former warehouse, is located next door. During a visit in late December, a baby stroller, a toy dinosaur, a ball and other telltale signs of children could be seen scattered among the art supplies and bric-a-brac. Several smoke drawings were in various stages of progress on the walls and on one of the worktables. Hanging nearby was a sheet of plastic covered in colored dots, a diagram showing the placement of glass cubes for one of her wall compositions. A few organically shaped aluminum platforms that she uses in her floor sculptures leaned against another wall.

After several solo shows in the latter part of 2003, Fernández didn't have any last year. When this is pointed out to her, she seems genuinely surprised, but as she explains, "It was a production year, a year of making new works." She will follow the show at Lehmann Maupin with exhibitions later this year at the Centro de Arte Contemporáneo de Málaga in Spain and the Fabric Workshop.

The artist's recent drawings and sculptures grew out of earlier works relating to architectural spaces and gardens. The latter, in particular, were influenced by a 1997 residency in Japan and a fellowship at the American Academy in Rome two years later. "I was really interested in formal gardens, particularly as a kind of form to look at how the viewer moves through a space," she says, her voice and large, hazel eyes becoming more expressive as she warms up to talking about her work. "When you penetrate those spaces, you experience them in an entirely different way than when you see them from a distance, The walking motion of the viewer unravels the space by tracing it."

Fernández's art has always been about creating an experience, a kind of "reflective moment" for the viewer, as she puts it, but her interest has shifted from static, carefully ordered gardens to nature's mutable, unpredictable, exotic side. In the past five years, she has made drawings of hurricanes, geysers and volcanoes, and sculptures suggesting flowing wisteria, shifting sand dunes and lava. Perhaps her best-known sculpture is Waterfall, from 2000, part of a commission she did for SITE Santa Fe. A gently curving cascade of blue and white plastic mounted on an aluminum armature, the piece shimmers with seductive, opalescent movement. As curator Erin Shirreff wrote in the catalogue, Waterfall and Fernández's other works are "icons of untamed natural beauty... formalized through hard-edge patterning and geometry, and domesticated by refined colors and materials like vinyl, lacquer, aluminum and plastic." They are simultaneously visions of the sublime and utterly synthetic constructions.

Part of the cleverness of Fernández's work is its ability to conjure rich associations and visual effects using rather basic forms and materials. Take her wall sculptures. The artist starts with cubes of glass (she previously used acrylic), which she has cut into two different sizes. She adds color by mounting silk-screened paper to the back of each cube, and then glues on an ordinary thumbtack. In creating her compositions, she works organically, directly on the wall. "I put a piece of plastic up and I start playing with different color cubes and moving them around, making my design," she explains. "I put some cubes up, stand back, put up a few more, stand back. I don't have a preconceived notion of how it's going to look." The end results call to mind fleeting rainbows, eclipses, mercurial clouds and swarms of insects.

Fernández acknowledges her debt to Minimalism, which is reflected most obviously in her clean, pared-down aesthetic. Yet her work also has a warm, sensually engaging quality not typically associated with Minimalist sculpture. It's a quality that the artist attributes, in part, to the influence of film. "In all these pieces, there's a cinematic undertone that's really important," she says. "It's the same kind of thing that happens in a movie, where you just indulge in the visual pleasure of looking. It's a kind of willingness to engage in something you know and accept is completely artificial."

Perhaps her most cinematic work to date is a commission she is producing for the 8.5-acre Olympic Sculpture Park in Seattle, scheduled to open in mid-2006. Designed by Weiss/Manfredi Architects, the park project accompanies a major expansion of the Seattle Art Museum and will include commissions by Mark Dion and other artists to be named, as well as major works by Alexander Calder, Mark di Suvero, Louise Nevelson and Richard Serra.

Fernández's piece will function as a pedestrian bridge over a rail line, with Puget Sound on one side and the surrounding city opposite. An entire block long, the structure will be made of laminated glass covered in what the artist describes as a "large benday pattern, so you see the city through this seemingly perforated filter. It looks like really dramatic cloud cover that's artificially colored in pinks and oranges," she explains, drawing a sketch in a notebook. "It's dark and dramatic in some places and opens up in others, but it happens over the span of this panorama, shifting gradually. The images you're looking at appear and disappear as you walk, creating a cinematic effect."

In a general sense, the effect will be not unlike that of walking around the ring of fire sculpture Fernández is creating at the Fabric Workshop. Rather than conjure nature and the elements in a gallery space, she is working directly with the striking Seattle skyline and its fast-changing weather. It should provide the perfect setting for an artist fascinated by dynamism of the natural world.