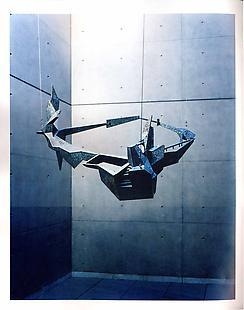 On the lowest level of Yu-un, Takeo Obayashi's Tokyo guesthouse, is the tea-ceremony room from which this unusual building gets its name. Yu-un, the 56-year-old Obayashi explains, means "a place where people gather and broaden friendships through art and culture." Indeed it is here, in this quietly elegant, deceptively simple space that the gracious, soft-spoken collector hosts friends, family, artists, and foreign visitors and introduces them to his quirky assemblage of international contemporary art. But Yu-un is much more than just a house with pictures on the walls. It makes a subtle, powerful statement about its owner's dedication to the integration of art and architecture.

Obayashi is the chairman of the multinational Obayashi Corporation, which was established in 1892 by his great-great-grandfather. When, in the mid I990S, the general contracting company moved its headquarters to the Tokyo suburb of Shinagawa, art was an integral part of the new building, and Obayashi was directly involved in selecting the pieces for the various spaces. He says he found the process, which entailed working with artists, "invigorating."

Soon after helping establish the corporate collection-which now contains around 50 examples by such names as Daniel Buren, Peter Halley, Mike Kelley, Yayoi Kusama, Langlands and Bell, Mariko Mori, and Ettore Spaletti Obayashi began buying art for himself. A genial man who nonetheless chooses his words carefully, he states that "the list of my private collection is not open to the public." After some cajoling, however, he allows that he owns "around 500" works. By most standards, this is a significant number, but it is not the size of his collection that has earned him international cult status among contemporary-art connoisseurs, critics, and curators; rather, it is the quality of his purchases, and the discerning eye and impeccable taste they reveal.

Yu-un is the ultimate statement of this refined sensibility. Designed by the celebrated Japanese architect Tadao Ando, the building-consisting of two above-ground stories plus a basement-is very simple: a glass box inside of which is a smaller concrete box divided by a grid intersected by a single diagonal line. This provides the basis for the interior layout: living areas, kitchen, and bedrooms on the first two levels; exhibition spaces and the tearoom in the basement. An incredible attention to derail is evident throughout. The lighting elements are embedded in the floor and ceiling to minimize their physical presence without reducing their effectiveness; the finely polished concrete walls present a surprising play of textures.

Obayashi spent two years collaborating closely with Ando on the design and construction, which allowed for several commissioned artworks to be integrated into the built environment. The most dramatic of these is the Danish artist Olafur Eliasson's site-specific installation consisting of 6,639 multifaceted silver-glazed tiles affixed to the walls of the narrow triangular courtyard running diagonally through the structure. This open space allows light into the deep, crevice like central well of the house. Lt also functions as a spatial metaphor for different perceptions of reality: As you move though the court yard, the tiles, resembling large sequins, change their own appearance and, consequently, that of the space they occupy.

Besides the Eliasson, Obayashi commissioned site-specific pieces by Lee Bul, Gabriel Orozco, Lee Ufan, and Tokujin Yoshioka. Lee Bul's work, a metal sculpture of faceted architectural forms giving the illusion of deep perspective, hangs in a tall cell-like space near the entrance. Yoshioka designed the bar on the first floor, with a table and long bench each made from a single slab of optical glass. Demonstrating the care taken in integrating the artworks with one another and with the architecture, Eliasson's flickering tiles are visible from the bar through a large glass window. A new sculpture by Lee Ufan is slated to be added in the coming months.

Obayashi has resisted the temptation to surround these permanent pieces with an array of works by other artists. He prefers an aesthetically lean, visually simple look fort he main living areas of the house, where several spaces of different sizes and shapes contain minimalistic, changing displays of pieces by a mix of young and established Japanese and international contemporary artists, including Olaf Breuning, Tracey Emin, Tatsuo Miyajima, Marc Quinn, Thomas Struth, Yoshihiro Suda, Hiroshi Sugimoto, and Wolfgang Tillmans.

In the basement galleries, Obayashi mounts a few exhibitions each year of works, which in the past have included solo shows of Naoya Hatakeyama, Hiraki Sawa, and Hans-Peter Feldmann. When I visited Yu-un this past spring, the pictures on view reflected h is new passion: young Japanese painters, such as Tomoko Atsuchi, Atsushi Fukui, Daisuke Fukunaga, and Yasuko Iba, all of whom blend abstraction, fantasy, and figuration. "There is so much talent," says Obayashi, "and nobody is really paying much attention to it."

Next up is a solo show of the London-based Conceptual artist Ryan Gander. Opening November 5, it will include pieces from Obayashi's collection as well as ones belonging to the artist. This may be Obayashi's most ambitious exhibition to date, given the highly experimental nature of Gander's rigorous but lyrical art, which often uses found objects and defies conventional display. "If 1 should dare to say," Obayashi says, explaining his choice of Gander, "his style of works is very intellectual." The same could be said for Obayashi, whose rigorous approach to art, design, and architecture is palpable in every element of Yu-un.