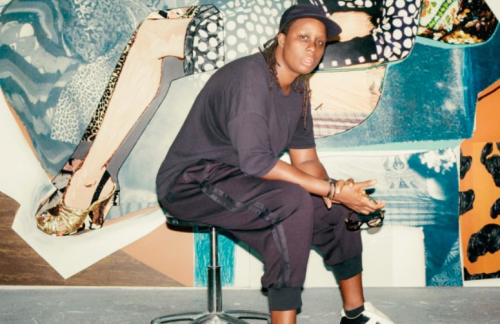 Mickalene Thomas sets her tea down on the kitchen table and saunters to the back of her airy Brooklyn studio, where her latest work practically explodes from the wall. In the kinetic mash-up of paint, silk screen, photography and drawing, a sleek woman with skin the colour of latte stretches seductively across the 12ft-wide canvas, her back slightly arched, her clingy black-and-white dress revealing plenty of leg.

Her left eye is drawn Picasso-style, rudimentary and as large as her head, and just above one shapely leg, wedged between patches of colour and pattern, is a tiny, scribbled face. Thomas giggles. “I was just having a little fun, creating this little face,” she says, “like someone’s peeking in. That’s like a little me in there.”

The painting’s title, “Racquel, I See You”, addresses Thomas’s partner and muse and hits home the power not only of looking but of being seen. Proclaiming her own visibility and that of other women of colour is at the heart of Thomas’s practice, which inserts the black female body into art history by placing her muses in iconic poses and settings. And she does it in the boldest ways possible: with sparkly rhinestones, jewel-tone acrylic paint and a hodgepodge of retro prints, all on sprawling canvases that command attention.

I Can’t See You Without Me, a solo exhibition of her paintings, photographs, videos and installations that opens at the Wexner Center for the Arts in Columbus, Ohio, later this month, will revolve around her many muses, including her late mother, her lovers and herself.

In person, Thomas, 47, has a down-to-earth manner that has charmed American art’s elder statesman, Jasper Johns, and the septuagenarian painter Pat Steir, who she befriended after switching place cards at a gala to sit next to her, and who calls Thomas’s work “profound”. Wearing a black T-shirt and track pants, her hair in short locks, Thomas is planning to go fabric shopping this afternoon. She is known for her photo sets and installations that scream 1970s rec room, replete with wood panelling, house plants and multiple clashing prints on a single chair, a look that riffs on childhood memories of her relatives’ houses.

Her grandmother, who lived in New Jersey, used second-hand clothes to patch worn furniture. Now Thomas turns thrift-store textiles into upholstery. “I love house dresses — the pattern, the history, knowing that a particular woman wore this, like your grandma,” she says.

Designing funky sets allows Thomas to live out her youthful fantasies of becoming an interior decorator. Instead, as an undergrad at the Pratt Institute in Brooklyn, she focused on abstract painting. In grad school at Yale, her professors urged her to take a photography class, where Thomas began making self-portraits. Her instructor, David Hilliard, known for his intimate photographs of his father, suggested she ask her mother, Sandra Bush, to model for her. “I don’t know if she would let me,” she told him. “We have a different type of relationship.”

Bush, a single mother, raised her daughter and son as Buddhist vegetarians in New Jersey and encouraged their creativity, but money was tight until she became involved with the man Thomas now considers her stepfather. Eugene was kind. He was also a drug dealer. Bush became an addict, and when Thomas was in her teens Eugene was imprisoned. Thomas moved in with her grandmother.

Further complicating the mother-daughter relationship was Thomas’s fear of coming out. Many family members, Thomas says, were homophobic: “I had a gay uncle who was treated so horribly.” Rather than risk being shunned, she moved to Portland, Oregon, soon after high school. “To leave was effortless. There was no anchor holding me there.”

Thomas enrolled in college, planning to study law, and found work at a local law firm. Her social circle, though, was full of artists and musicians, and she soon realised that the law firm was boring. When a friend took her to see an exhibition of photographs by the African-American artist Carrie Mae Weems, she was bowled over, particularly by Weems’s images of a mother and daughter. “It was probably the first time I ever saw myself in art,” she says. “Those photographs really hit the core. I felt, that’s what you can do with art? Wow. One day after I went to see the show on my own, I didn’t even think about it, I just walked to the art-supply store.”

By the time the idea of Thomas photographing her mother was floated in 2000, Bush was clean and they had reconciled. Her mother agreed, channelling the 1970s “blaxploitation” star Pam Grier, posing in an Afro wig and crocheted swimsuit.

In her mother, Thomas found a subject who solidified her transition to figurative art. “There’s material there,” she remembers thinking. “Art is therapy, right?” Bush came alive in front of her camera. “She was a very soft-spoken, statuesque powerhouse. She had this magnetism. She was also 6ft 1in and very proud of being tall. ”

The photographs are artworks in themselves, but Thomas also used them as references for her paintings. At Pratt she had explored unorthodox materials, but at Yale she stuck to oil paints. Such conservatism didn’t suit her. “I always felt my hand needed more,” she says. “It wasn’t physical enough for me. Visually, I felt the paintings needed more texture, and I couldn’t figure out how to do that with oils. So I went back to the materials I had fun with.”

She unpacked her glitter. Then came rhinestones. Applied strategically, they added light and shine, and evoked both Seurat’s pointillism and aboriginal dot painting. “It just felt so good and right,” she says. “And [these portraits] were crazy. And they were ugly and they were beautiful.”

At Yale she also plunged into what she calls a “rabbit hole of discovery,” finding that Manet and Matisse had used black and north African models in pictures of contemporary western life. She was rocked to learn that Matisse based many of his famed drawings on black women, and posits that Manet’s “Olympia” is as much about the black maid as the white prostitute.

“History removed them from the conversation,” she says. Thomas decided to restart that conversation, placing black women in the same poses as some of western art’s most famous works. In 2010, for instance, she took on Manet’s “Le Déjeuner sur l’herbe”, noted for its nude woman alongside clothed men, with a painting of three self-assured — and fully dressed — black women.

In October, an exhibition at Columbia University’s Wallach Art Gallery, Posing Modernity: The Black Model From Manet and Matisse to Today, featuring Thomas’s work, will attempt to resuscitate that history. “If we’re looking at an artist’s practice, we need to look at their entire practice,” says Thomas. “When you remove others from the conversation, you’re stating that they don’t exist. When you’re never seeing yourself, you don’t feel as though you have a place in society.”

After a residency at the Studio Museum in Harlem, Thomas, discovered another muse in her then-girlfriend Maya. “It was another black body to think about,” she says. “She was very reserved. And she was beautiful. So it was very easy.”

In 2007, she had another creative breakthrough with “A Little Taste Outside of Love”, rendering a reclining, nude Maya staring over her shoulder at the viewer, in direct response to European nudes such as Titian’s “Venus of Urbino” and Ingres’s “Grande Odalisque”. “There are certain works, while you’re in the process of making, it’s like you can foreshadow the power of the painting, but you don’t really know,” she says. “There’s this very mystical power and beauty.”

In addition to tackling canonical men head-on, Thomas went big. At 9ft x 12ft, it was her first monumental canvas. “It was basically no turning back with the scale of my work,” she says. “I’d embarked on this new endeavour of understanding the presence of this black body on that scale. It was always a political statement: people need to come in contact with this body, be face to face with it. It’s the ultimate sense of validation and the claiming of space.”

After her relationship with Maya ended, Thomas continued to paint her from photographs she’d already made, but years went by before she began to regularly photograph another girlfriend for her work. Painting a lover — or a mother — has its challenges: “Maybe it did create some tension between us,” Thomas says of making Maya her muse. “You hope they see themselves the way you see them.”

For most of the time in between, Thomas found other models, often friends of friends. Then, about a decade ago, her mother’s health went into steep decline. Thomas backed off from photographing her until one day, a crying Bush told her, “I think you don’t photograph me because I’m not beautiful.” In actuality, Thomas says, she hadn’t wanted her mother to feel exploited, as her body had deteriorated from arthritis. Her mother’s sense of rejection, though, touched a nerve, and Thomas admonished herself. “I was like, this is so f***ed up. And here I am talking about beauty.”

It was while accompanying her mother to dialysis that she began filming their conversations, which she turned into a video portrait, “Happy Birthday to a Beautiful Woman: A Portrait of My Mother”. “My mother is my muse, but do people really know who she is?” Thomas says. “If Mona Lisa could speak, who would she be? I’m creating images of these women, but does the world really get the sense of their lives?” Her mother was at the film’s premiere in September 2012 but died two months later.

By this time, Thomas had been married and divorced (though still a co-parent to her and her former wife’s daughter). Her new muse was Racquel Chevremont, an art collector and consultant. Chevremont, a former fashion model, became a constant presence on set, often helping the sitters pose, but Thomas waited several years before photographing her. The experience, says Chevremont, is radically different from modelling: “Mickalene is not looking for you to be pretty. She is looking for you to be yourself. It’s very much about the woman, and the power behind the woman.”

Thomas’s women are always strong and self-possessed — and unabashedly sexual. “There’s this lust there,” she laughs. “Yeah, women are beautiful.” But, she contends, the way one woman looks at another is different from the traditional idea of how a man sees a woman. “The only objectification is my own desire to emulate their femininity, me wanting to possess that, to embody it.”

“Mickalene’s a proud, black lesbian and in that regard is uniquely capable of taking the historic gaze and reclaiming it,” says Michael Goodson, senior curator at the Wexner Center. “There’s an inherent empathy, as opposed to the gaze of men.”

“It’s all about how they want to present themselves,” Thomas says of her models, recalling the first time she thought her mother might be revealing too much skin. “I said, ‘Mom, your breast is showing, pull up your shirt.’ She was like, ‘No, let it fall as it may.’ It was this sense of freedom.”

Thomas has also ceded the camera — and the power of the gaze — to her sitter. In the video series “Je t’aime”, the third of which will premiere at the Wexner, Thomas and Chevremont take turns filming one another. “So she’s presenting how she sees me as well,” Thomas says. “We’re both nude. It’s how two lovers are seeing each other.”

“I Can’t See You Without Me” is at the Wexner Center for the Arts, Columbus, Ohio, from September 14 to December 30; wexarts.org.

“Posing Modernity: The Black Model From Manet and Matisse to Today”, is at Columbia University’s Wallach Art Gallery from October 24 to February 10 2019; wallach.columbia.edu