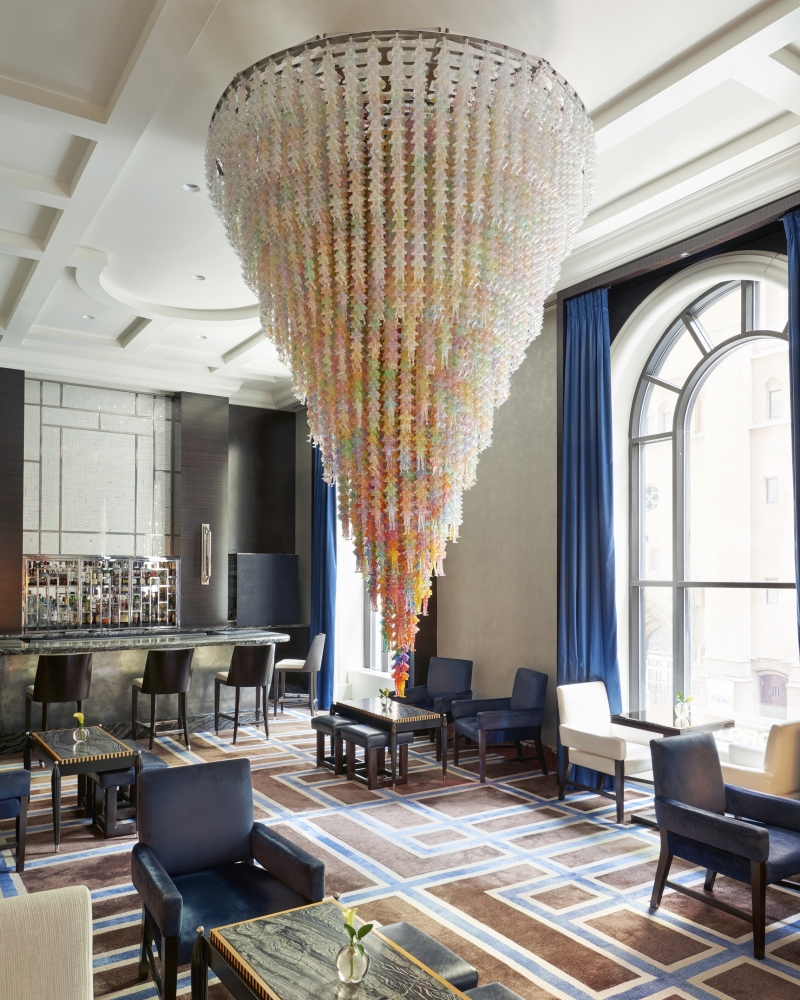 Ahead of Frieze New York, The Peninsula New York is proud to present Home, an exhibition honoring the notions of home, identity and community, as an ode to The Peninsula’s larger commitment to celebrating family and heritage. The exhibition will feature a curated selection of original works by artists including Do Ho Suh, Catherine Opie, Angel Otero, Ashley Bickerton and Heidi Bucher, among others.

Notable pieces on view at The Peninsula New York include two large-scale architectural installations by Korean-born, London based artist Do Ho Suh, who is internationally renowned for his immersive installations and “fabric architecture” sculptures that explore the nature and meaning of home. Among his most iconic work on display in the hotel’s Palm Court, Wielandstr. 18, 12159 Berlin - 3 Corridors (2011) recreates the corridor of the artist’s former apartment in Berlin, to scale, entirely in ethereal fabric. The work was prominently featured in the 2018 exhibition “Do Ho Suh: Almost Home” at The Smithsonian American Art Museum, determined by The Art Newspaper to be the most popular contemporary art exhibition in the world for 2018. In Gotham Lounge, Suh’s Cause & Effect (2007) is composed of hundreds of small, colorful, acrylic figures, which form a cone-shaped chandelier suspended from the ceiling and reaching almost to the floor. The artwork is a physical realization of existence, suggesting strength in the presence of numerous individuals, as the figures appear to rise from the shoulders of the single figure at the bottom.

Home also includes several portraits by Catherine Opie in the upper lobby, to the right of the front desk. Featuring prominent art world figures, the portraits depict friends and confidants that make up Opie’s artistic community. With a focus on an examination of subculture communities, Opie’s photographs unite current day politics and societal structures with a classical art aesthetic. Opie gained notoriety in the 1990s with her series of portraits of LGBTQA+ subjects, considered groundbreaking during the height of the polarizing “culture wars.” Since then, Opie has traveled extensively, documenting contemporary American life and geographical locations through the photographing of subjects who are often friends, family, and peers.

Paintings by Angel Otero are on view in the upper lobby, across from the front desk. The Puerto Rican-born, New York based artist is internationally recognized for his innovative process in which he paints onto large plates of glass, then scrapes the partially dried oil paint from the surface, splicing and collaging these painted “skins” into multi-layered compositions. The artist often cites his memories of his childhood in Puerto Rico as inspiration for his work, particularly his association of certain materials, including wicker, lace, and crystals that he incorporates into his paintings, with his grandmother’s home. Otero recently announced plans to build a studio in Puerto Rico to support the community as it rebuilds after Hurricane Maria, and to provide better arts and culture access.

Guests entering the hotel will be greeted by Ashley Bickerton’s The Edge of Things (1993), an early work created by the artist after relocating from New York to Bali. Recognized for his innovation as part of the Neo-Geo group of artists in 1980s New York, Bickerton’s relocation initiated a new era in his practice, concerned with the commodification of art and nature. Also on view are works by the late Swiss artist Heidi Bucher, featured in the upper lobby seating area. Bucher is best known for her innovative use of latex to cast large-scale architectural features, including entire buildings. Bucher referred to these castings as “skinnings” or “moultings,” imbuing these captured spaces with animal or biological attributes. Her investigation of the physical boundaries between the body and its surroundings aligns her with other feminist artists who were committed to exposing the complex relationship between women and the gendered, domestic environments to which they were often relegated.

The hotel has collaborated with private collectors and Lehmann Maupin, an international art gallery renowned for its representation of distinguished and diverse artists from around the world, to feature these inspiring artists who present the notion of home and community through their original works. With this, each artist offers an extension of comfort, calmness and sense of place, just as The Peninsula offers to each guest who walks through our doors.

The Peninsula Hotels has a longstanding commitment to art and recently launched a new global contemporary art program titled Art in Resonance. The program seeks to meaningfully contribute to the cultural ecosystem by giving emerging and midcareer artists the financial and logistical support they need to realize complex projects that will then travel to Peninsula locations around the world for the public to enjoy. Curated by Bettina Prentice and Isolde Brielmaier, the first iteration of the multiyear program launched in Hong Kong this Spring and is on view through June 21, 2019. It features major new commissions by Janet Echelman, Timothy Paul Myers, Iván Navarro, and MINAX. The next iteration will launch this Fall at The Peninsula Paris. This multi-year program will grow as it travels between the ten locations of The Peninsula Hotels and the three hotels currently under development in London, Istanbul and Yangon.

As an official hotel sponsor of Frieze New York, The Peninsula New York will also launch a series of one-of-a-kind events and activations to take place beginning April through November, including a cocktail launch reception and collectors’ dinner; ‘Culture Talks’ hosted by artists and curators; as well as partnerships with various arts organizations. For details, please visit www.peninsula.com/newyork.

Image: Do Ho Suh, Cause & Effect, 2007. Installation view at The Peninsula New York