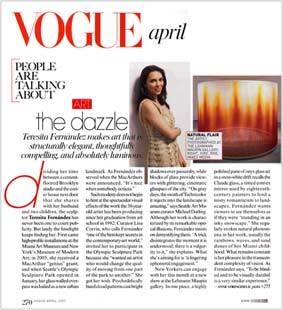 People are Talking About
Art

Dividing her time between a cement-floored Brooklyn studio and the cozier house next door that she shares with her husband and two children, the sculptor Teresita Fernández has never been one to court publicity. But lately the limelight keeps finding her. First came high-profile installations at the Miami Art Museum and New York's Museum of Modern Art; in 2005, she received a MacArthur "genius" grant; and when Seattle's Olympic Sculpture Park opened in January, her glass-walled overpass was hailed as a new urban landmark. As Fernández observed when the MacArthurs were announced, "It's nice when somebody notices."

Such modesty does not begin to hint at the spectacular visual effects of the work the 38yearold artist has been producing since her graduation from art school in 1992. Curator Lisa Corrin, who calls Fernández "one of the best kept secrets in the contemporary art world," invited her to participate in the Olympic Sculpture Park because she "wanted an artist who would change the quality of moving from one part of the park to another." She got her wish. Psychedelically hued cloud patterns cast bright shadows over passersby, while blocks of glass provide viewers with glittering, cinematic glimpses of the city. "On gray days, the swath of Technicolor it injects into the landscape is amazing," says Seattle Art Museum curator Michael Darling. Although her work is characterized by its remarkable optical illusions, Fernández insists on demystifying them. "A trick disintegrates the moment it is understood; there is a vulgarity to it," she explains. What she's aiming for is "a lingering ephemeral engagement."

New Yorkers can engage with her this month at a new show at the Lehmann Maupin gallery. In one piece, a highly polished pane of onyx glass set in a snow-white drift recalls the Claude glass, a tinted convex mirror used by eighteenth-century painters to lend a misty romanticism to landscapes; Fernández wants viewers to see themselves as if they were "standing in an inky snowscape." She regularly evokes natural phenomena in her work, usually the rainbows, waves, and sand dunes of her Miami childhood. What remains constant is her pleasure in the transcendent complexity of vision. As Fernández says, "To be blinded and to be visually dazzled is a very similar experience."