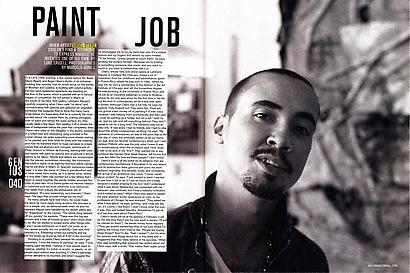 IT'S LATE ONE evening, a few weeks before Art Basel Miami Beach, and Angel Otero's studio, in an industrial building that sprawls over an entire block on the border of Brooklyn and Queens, is bustling with colorful activity. His two paint-splattered assistants are kneeling on the floor of the space, which is packed with art in various stages of completion (he will exhibit in Miami at the booth of his New York gallery, Lehmann Maupin), carefully preparing what Otero calls "oil skins" and communicating with glances and gestures; an unspoken symbiosis that suggests they've done this many, many times before. It's these skins that he is currently the most excited about. He creates them by coating plexiglass with oil paint and letting the outer surface dry (this usually takes a few days), then peeling it off in sheets the size of bedspreads before the paint has completely dried. Otero-who used to live (illegally) in the studio, sleeping in a lofted bed and showering using a bucket in the corner-shows me racks supporting more sheets waiting to be peeled, and then what he does with the material, and how he transfers them to huge canvases to create pieces that are abstract and complex, reminiscent of Philip Guston or Willem de Kooning, teeming with color and loaded with paint so textural and sculptural it almost seems to be fabric. Words and letters are incorporated Into the pieces, sometimes obviously, like ESPERANZA stenciled in black on an eight-by-nine-foot yellow canvas that he will show in Miami (in Spanish, esperanza means hope; it is also the name of Otero's grandmother) and at other times more subtly, as in a darker work, where it's only after Otero has pointed out a few letters that I begin to piece together the words, hidden amongst the folds of paint skin. It's a Sartre quote-HE PREFERS HIMSELF TO EVERYONE ELSE BECAUSE EVERYONE ELSE ABANDONS HIM-taken from a study the philosopher did of Baudelaire. "It's very melancholy, very dramatic," Otero says. "He says that process brings out our soul."

As many people have told Otero, he could make the skins far more easily using acrylics. His process is not a simple one, as demonstrated when he and his assistant Miguel were transferring the vibrant yellow skin or "Esperanza" to the canvas. "The whole thing slipped off too quickly," he explains. "There was this big-ass wrinkle, and it was all fucked-up and I didn't know what o do. But we started to scrape some other things onto it and I wrote ESPERANZA on it and"-he looks up at he canvas proudly, but not pridefully-"just look how beautiful it is. Everything turned out perfectly and we left the studio as drunk as hell at 5:30 in the morning."

Working in oil yields Otero rewards he couldn't get elsewhere. "I love the history of painting," he says. "I love treating paint like flesh. I believe in how people react to material, whether it's tinfoil, or acrylic, or plastic, or oil-people react without even touching it." Otero's paintings almost demand to be touched, and when I suggest this he encourages me to run my hand over one-it's a unique texture and my fingers find details my eyes missed. "To be honest, I prefer people to touch them," he says, stroking the surface himself. "Because you're looking at something someone else made, and you want to touch it, you want to believe how real it is."

Otero, whose new solo show opens at Lehmann Maupin in Chelsea this February, draws a lot of inspiration from his childhood and adolescence spent in Puerto Rico, where he was born in 1981. When he was 24, he won a scholarship to the School of the Art Institute of Chicago, and left the humanities degree he was pursuing at the University of Puerto Rico, and his job as an insurance salesman, to move to America, where he not only saw snow for the first time in his life, but the kind of contemporary art he'd only ever seen in books. Although Otero had a full ride, he says his parents "fully freaked out. They were like, 'How are you gonna make money off of painting?' It was crazy because I was helping them economically and they said I could do painting as a hobby, but not a job. I sold my car, quit my job, and left everything behind: They didn't speak to me for a long time." The transition was not an easy one. "It was scary. I had no friends, and I had no idea about this whole contemporary art thing," he says. "My ignorance of contemporary art was to the point that on the first day of class the professor asked us all our name, our age, and our favorite contemporary artist, and I said Jackson Pollock, who was the only artist I knew. It was so embarrassing when the professor said 'How does it feel to be alive in the '50s?' They wanted me to say someone like Damien Hirst, Anish Kapoor, Jeff Koons, but I was like, Who the fuck are these people? I don't know."

Otero's work is all the better for its distance from any contemporary touchstones. It flourishes in its own space and its abstraction feels genuine and pure; his work radiates originality, and heralds, loudly and confidently, the arrival of an ambitious new voice. "I never cared about context," he says, "I just wanted to paint. I wanted to see how it felt to do it. I did so much shit initially because it looked amazing to me, but I didn't understand what it was about. Abstraction just connected with me because I was confused, but it was a beautiful confusion, and it looked so easy!" When Otero was asked to explain his early abstract works, explosions of color, to his professors at Chicago, he was stumped. "They asked me what it was about," he says, grinning, "and I was just like, uh, it's colors … I like them!' I didn't know what the fuck it was, they just looked beautiful. Sometimes I'd just lie and say they were about Puerto Rico:'

Otero's family will be at his opening in February; it will be the first time they'll see his new work in person ("It wil be intense for them!"). He sends money home regularly "They get scared sometimes, they're not sure where I'm getting the money from-they're like, 'People are buying hese things?' And I'm like, 'Yeah, I swear!'"), but it's when his parents read things about him in the news and in nagazines that they really believe in his success. "When they read something that someone has written about me," Otero says, with a smile, "that makes them super proud."