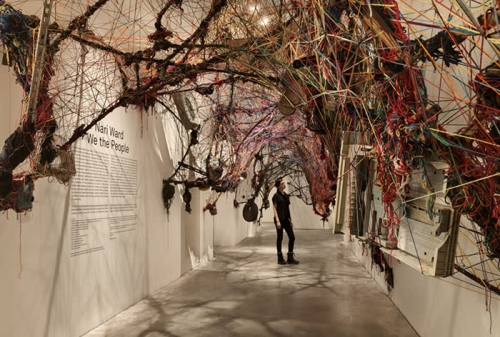 It takes tenderness and ingenuity to transform debris and rubbish into an urgent, unconsoling metaphor

Nari Ward was born in Jamaica, but he has spent the bulk of his adult life in Harlem, New York, scavenging bits of the neighbourhood and embedding them in his art. Ward’s daily perambulations are partly scouting expeditions through generous streets, which have furnished cribs, baby carriages, washbasins and rubber tyres that he paws through, hauls home, and weaves into enormous layered sculptures. Ward’s plangent, expansive works now span three floors of the New Museum, laying down big chunks of Harlem on the Lower East Side. They tell the story of an artist’s life intertwined with the city’s, their shared past and possible futures.

From the time he moved into the converted firehouse that serves as his home and studio, Ward found his worldview shaped by what he discovered outside his front door. He collected supermarket shopping carts that homeless men and women had already repurposed to transport their stockpiled belongings. Ward recycled the wagons into mobile totems, towers of stuff mummified in knotted plastic bags. In “Savior” (1996), a chair perches atop the teetering pile, a throne for the king of castoffs. Ward videotaped himself wheeling these creations around the city, eliding the difference between creative urge and desperate need.

Those portable structures bloomed into “Hunger Cradle”, also from 1996, a set of web-like tunnels made of pipes, shelves, ducts and other bric-a-brac suspended in a tangle of yarn and rope. Visitors who pick their way beneath the levitating clutter may come across their own castoffs or tactile memories from decades ago, as if all our Rosebuds had been scrambled together by a hurricane. Pick up a forgotten object — a photograph, a tool, a toy — and it becomes an instant artefact, humming with archaeological memory. Ward turns these finds into complicated collective shrines.

His ritual forays into the streets hark back to West Coast-based African-American predecessors such as Noah Purifoy, John Outterbridge and David Hammons. Propelled by the Watts riots and Martin Luther King Jr’s assassination in 1968, these artists rummaged among the ruins for scraps to hammer into radical monuments: old shoes, crushed umbrellas, broken bits of building, mountains of scrap metal, wood boards martyred by bent nails. The radical creations they fabricated out of all this debris were shouts of redemption and regeneration. Decades later, driven by a milder impulse, Ward uses similar techniques to create havens for rumination and mourning.

His moods and meanings can be slippery. In “Iron Heavens” (1995), he leaned hundreds of charred baseball bats against a wall made of roasting pans, a gunmetal altar for some gloomy ritual. Ward roasted each bat to a feathery black, then studded it with cotton balls that had been dipped in sugar, ironed and dried. They appear like white fungus on the ravaged wood. The dead bats are unmistakably American and deeply ambiguous: they speak of backyard games and racist attacks, but also of relics after a church fire. They have been neutralised, like a cache of arms destroyed on a pyre.

Wistfulness permeates much of Ward’s oeuvre, rising from the past lives of his materials. “Nostalgia can be magical, but it can also be a trap,” he told me a few years ago. “My challenge is to have these longings for another time also be a visceral experience.” Wary of the ways objects lose their associations and become increasingly inert, he looks for things that retain their intensity, both their physical presence and an ability to churn up feelings and associations.

His most haunting piece in this manner is “Amazing Grace” from 1993, a flotilla of 300 cast-off baby strollers, gathered from all over northern Manhattan. In the darkened gallery, the carriages become ghostly stand-ins for the children we all once were, trapped and pushed around, but also, with any luck, pampered into maturity. Mahalia Jackson sings in the background: “I once was lost, but now I’m found.” That last phrase feels uncertain, in this context; there’s something inherently tragic about a vacant pram, a hint that it might not merely have been outgrown.

Even relics age. Ward assembled “Amazing Grace” out of late-model vehicles — Maclarens, Bugaboos and other brands popular in the mid-1990s. A quarter century later, those vintage strollers look skimpy compared to today’s wide-bodied toddler tanks, and they remind us how much more space people demand now, even as there’s less square footage to go around.

Ward’s assemblages seem to demand interpretation and the New Museum obliges with reductive readings. “Hunger Cradle” grows and changes with each new installation, just like the city that midwifed it. The curators see it as an activist gesture — a kind of rescue mission to preserve Harlem’s character in a time of gentrification and erasure. Certainly Ward’s neighbourhood has transformed. Since 1993, when he made “Amazing Grace”, the number of murders in his precinct has fallen from 66 to five, and the capital of black America is no longer mostly black.

But to treat Ward’s output narrowly, as a response to gentrification, is to gloss over the fact that his techniques and sensibility go back to Rauschenberg. Ward’s art was always too subtle to be read as merely protest, too broad to be timely, trenchant commentary. He deals with loss, a condition that doesn’t depend on the cost of real estate.

The angriest work at the New Museum is also the most shockingly enigmatic. In “Den”, from 1999, a mangled, headless animal carcass lies on the floor, paws up, at one end of a blackened strip that resembles a Rauschenberg tyre print. As soon as you get past the awfulness, though, you notice that the portrait of roadkill is really a still life, with four carved chair legs nailed to a tree trunk body that’s been pierced by a ferocious-looking metal pole. The skid mark is actually a filthy Oriental runner. Fragments of a chain-link fence erupt from the truncated torso.

It’s hard to know how best to parse this piece — as an environmental allegory, perhaps, or a requiem for domestic comfort, with home decor commandeered to depict violent death. The whole thing practically shrieks with pain, and yet it also expresses the tenderness of its creator, transforming a few hunks of mute debris into an urgent, unconsoling metaphor.

Source
Back to Top