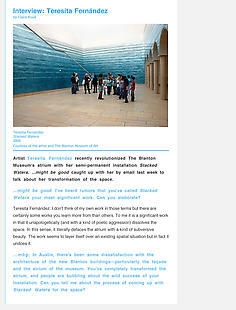 Artist Teresita Fernández recently revolutionized The Blanton Museum's atrium with her semi-permanent installation Stacked Waters. ...might be good caught up with her by email last week to talk about her transformation of the space.

...might be good: I've heard rumors that you've called Stacked Waters your most significant work. Can you elaborate?

Teresita Fernández: I don't think of my own work in those terms but there are certainly some works you learn more from than others. To me it is a significant work in that it unapologetically (and with a kind of poetic aggression) dissolves the space. In this sense, it literally defaces the atrium with a kind of subversive beauty. The work seems to layer itself over an existing spatial situation but in fact it undoes it.

…mbg: In Austin, there's been some dissatisfaction with the architecture of the new Blanton buildings—particularly the façade and the atrium of the museum. You've completely transformed the atrium, and people are bubbling about the wild success of your installation. Can you tell me about the process of coming up with Stacked Waters for the space?

TF: The space completely alienated museum-goers. I began to see the space as a volume that I could fill with water; I wanted to create an arena for the experience of submerging and emerging. The horizontal lines became water lines, levels that mark your depth within the space. As you walk up the 50 steps, the level lines mark your shifting ascension until when you get to the second to last step, you literally "step" out of the water. The surface of the acrylic is highly reflective so that the piece becomes like a real-time cinematic projection of the activity in the space. The tone of the work changes dramatically throughout the day and seasons, becoming quite dark and somber when it's overcast, and reflective and active when there is bright daylight. I think of the piece almost like a portrait of the changing Texas light. A museum is a place that is revisited and so it was essential to me that viewers might see it differently each time they visit. The title is a reference to Judd's stacked pieces. Even though Stacked Waters completely embraces illusion, I also felt like I was putting the viewer on the inside of one of his glowing stacks.

TF: I have always been interested in the relationship between the tactile and the visual, the "eyes of the skin". I am not interested in deconstructing the sensual within some theoretical discourse—we simply don't experience the world that way. But I am fascinated by how the visual seduces a viewer into caring about an idea. The conceptual is put into practice by a perceptive, engaged, seduced viewer, fully aware and willing to comply. In 1996 I made 2 large installations that referred to empty swimming pools. They were partially based on a 1920's design by Adolf Loos for a house for Josephine Baker. The house (never built) was to have an indoor swimming pool with skylights above and darkened corridors around it with windows that looked into the depth of the pool. While my piece dealt with the act of looking, a kind of voyeuristic delight, it was incredibly sensual in its allusion to water moving over skin. Stacked Waters is a bit of a return to that in that there is an implied freedom to roam, to activate the space by indulging in its imagined water.

…mbg: We've been having conversation at …might be good about the aestheticization of perception, the isolation of sensual experience and the potential for detachment from social and political context, (for example, see Lane Relyea on Olafur Eliasson's work in issue #114). What is the critic missing about your work when this kind of critique gets leveled against it (for example, a review in June 2007 Artforum called your work "a hermetic sublime, a bit too reminiscent of a corporate lobby")?

TF: This sounds sort of ridiculous to me, as though the buzzer goes off to start "perceiving" the second you face an artwork. More problematically, it implies that it is the sole responsibility of the artist (or artwork) to inspire or prompt perception, engagement and to guarantee meaning. A viewer's response can be just as "stylized," or "isolating" as a work. I, too, depend on a thoughtful, willing viewer to complete the circuit of meaning in my work.

If a work has an audience and people are questioning or criticizing its validity I'd say it has created a forum—a clear manifestation of a social/political context. I also think that both exaltation or disappointment in a work are overtly politicized moments that say as much about the viewer/author as they do about the measurable materiality of what we call art. In fact, I would say that it is this internal dialogue, this fantasy of how one projects what one has experienced that is at the core of my concepts.