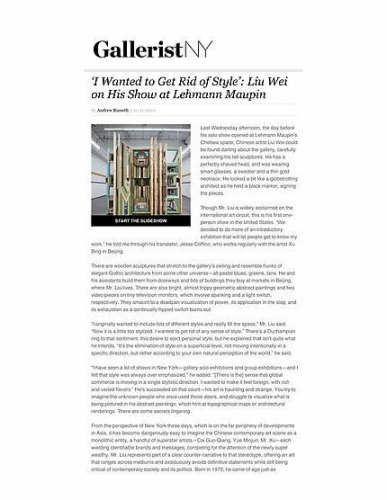 ‘I Wanted to Get Rid of Style’: Liu Wei on His Show at Lehmann Maupin
By: Andrew Russeth


Last Wednesday afternoon, the day before his solo show opened at Lehmann Maupin’s Chelsea space, Chinese artist Liu Wei could be found darting about the gallery, carefully examining his tall sculptures. He has a perfectly shaved head, and was wearing smart glasses, a sweater and a thin gold necklace. He looked a bit like a globetrotting architect as he held a black marker, signing the pieces.

Though Mr. Liu is widely acclaimed on the international art circuit, this is his first one-person show in the United States. “We decided to do more of an introductory exhibition that will let people get to know my work,” he told me through his translator who works regularly with the artist Xu Bing in Beijing.


There are wooden sculptures that stretch to the gallery’s ceiling and resemble hunks of elegant Gothic architecture from some other universe—all pastel blues, greens, tans. He and his assistants build them from doorways and bits of buildings they buy at markets in Beijing, where Mr. Liu lives. There are also bright, almost trippy geometric abstract paintings and two video pieces on tiny television monitors, which involve spanking and a light switch, respectively. They amount to a deadpan visualization of power, its application in the slap, and its exhaustion as a continually flipped switch burns out.

“I originally wanted to include lots of different styles and really fill the space,” Mr. Liu said. “Now it is a little too stylized. I wanted to get rid of any sense of style.” There’s a Duchampian ring to that sentiment, this desire to eject personal style, but he explained that isn’t quite what he intends. “It’s the elimination of style on a superficial level, not moving intentionally in a specific direction, but rather according to your own natural perception of the world,” he said.


“I have seen a lot of shows in New York—gallery solo exhibitions and group exhibitions—and I felt that style was always over emphasized,” he added. “[There is the] sense that global commerce is moving in a single stylistic direction. I wanted to make it feel foreign, with rich and varied flavors.” He’s succeeded on that count—his art is haunting and strange. You try to imagine the unknown people who once used those doors, and struggle to visualize what is being pictured in his abstract paintings, which hint at topographical maps or architectural renderings. There are some secrets lingering.

From the perspective of New York these days, which is on the far periphery of developments in Asia, it has become dangerously easy to imagine the Chinese contemporary art scene as a monolithic entity, a handful of superstar artists—Cai Guo-Qiang, Yue Minjun, Mr. Xu—each wielding identifiable brands and messages, competing for the attention of the newly super wealthy. Mr. Liu represents part of a clear counter-narrative to that stereotype, offering an art that ranges across mediums and assiduously avoids definitive statements while still being critical of contemporary society and its politics. Born in 1972, he came of age just as Tiananmen Square occurred, as his nation and its culture were slowly opening up. He is, as art critic Gunnar B. Kvaran put it in a recent essay, among the first generation of “post-Mao children.”


There is a brave, even brash, willingness to accept multiple meanings in his practice, to play with interpretation while still refusing to be pinned down to a single reading, like perhaps Richard Artschwager. (Some of Mr. Liu’s sculptural paintings—blocky forms wrapped with industrial canvas that may be his most interesting works—as well as his palette, owe something to that late artist.) “We can talk about my works, but I’m not going to explain them,” he said with a smile. “The work that was put there is already it’s own best explanation. If I use language or writing to explain it, then I won’t make the work.”

Asked about those doorways, which resemble cathedrals or temples formed from cast off architecture—he was quick to argue that they have “nothing to do with the concept of demolition and resettlement. I’m after a specific color, a specific material.”


In his frenetic abstract paintings, his colors turn electric, higher-pitched. They are made from images that he creates with the aid of a computer. “I first start by making an image with the mouse, and then the computer program continuously finds and creates new images,” he said. “A computer is like a brain, another brain that is continually making new things and thinking.” Is there an element of chance at play, then? “Yeah,” he said. “I’ll turn its sort of randomness into my own randomness.”

Being so open, I suggest, might lead to misunderstandings. What do people mistake about his work? “That problem doesn’t exist, because my work doesn’t have any clear, specific meaning to begin with,” he said. “I hope that for everyone, including you and everyone else, that it’s only the start of a questioning. It’s not knowledge, and it’s not an answer. I want to eliminate the sense of knowledge or any other meanings [from the work].”


He was flipping an ornate silver lighter in his hand. “Like this lighter, for instance. It’s just a lighter, it doesn’t matter what its history is,” he said. By working it into another sculpture or installation or printing it with his name—many works are labeled “property” of L.W.—he could surely change it, dispense with its familiar associations, open it to other possibilities. “I would get rid of its sense of knowledge,” he said. “You would see it and start thinking about other things and it would arouse your thinking.”