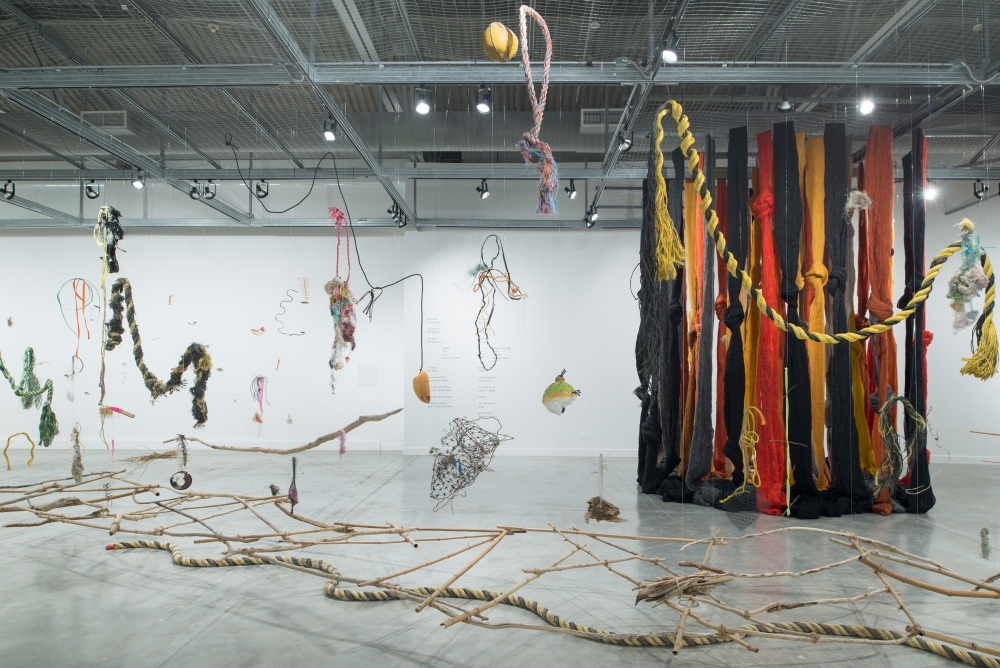 ON A SATURDAY MORNING this past December, Cecilia Vicuña bundled some fifty people into a living version of a quipu—a system of knots utilized by indigenous Andean communities for record keeping and communication. Vicuña and a group of assistants bent over the supine participants, who were swaddled in blue-green combed wool. The artist had written SEE/RISE on her and her assistants’ palms, and they turned these inscriptions toward each body in the human quipu as if cuing the participants to look and ascend. Throughout the morning, Vicuña quietly chanted, her voice like a lullaby. If we could read this quipu, it might tell a story about individuals forming a collective cocoon, then being reborn.

This preternaturally gentle performance was part of the Museum of Contemporary Art North Miami’s iteration of “About to Happen,” the Chilean-born artist’s first major traveling exhibition in the United States. (The show was organized by the Contemporary Arts Center, New Orleans, and cocurated by Andrea Andersson and Julia Bryan-Wilson.) In the galleries, site-specific installations sit alongside sculptures, videos, texts, and two oil paintings: Paro nacional, Bogotá (National Strike, Bogotá), 1977–78, on paper, and its remake, El paro / The Strike, 2018, on linen. Another version of the former work was lost during the political unrest in Chile that followed dictator Augusto Pinochet’s US-backed military coup. The upheaval sent Vicuña, who’d long fought for socialism, into exile.

The show focuses on two of the forms for which the artist is best known: quipus and her delicate “Precarios” (Precarious) sculptures, 1966–, tiny arrangements of organic and man-made materials such as driftwood and found bits of pretty rubbish, often adorned with thread. A 2018 video interview playing at the exhibition’s entrance reveals that Vicuña first came to these forms as a teenager, when she realized that “quipu[s] had been destroyed, disappeared, persecuted by the church” during the Spanish conquest of the Andes. She began “to speak in quipus,” reviving and transforming her ancestors’ language and memories.

Vicuña continues to work with the earth and to center the rights of indigenous peoples. In the video, she relays her sense that although much of Chile’s indigenous history was suppressed by colonization, it remains palpable. She felt it most powerfully when, as an adolescent, she stood on the beach in Concón (a city in Chile that, she explains, was named after an Andean deity), where the Aconcagua River feeds into the Pacific Ocean, and realized that the ancient and infinite can be sensed in everything from soil to sunlight: “The sea...the wind, the light, everything was aware, and I, this tiny thing smaller than a grain of sand, was also aware.” That understanding informs her studio production and is reflected in her work’s range of scales, from the tiny “Precarios” to the massive vermilion and orange Burnt Quipus, 2018, which honors those lost to the October 2017 fires in northern California and all bodies harmed by human-wrought destruction.

Vicuña’s practice is resurrectional: We the People, 2016, a work of red thread sewn into canvas, seems to reanimate the blood and life forces of those who actually built this country but were excluded from its foundational texts. It’s also archaeological: In the hour-long animation La noche de la especies (The Night of the Species), 2009, pencil drawings of letters become glowing aquatic bacteria, a taxonomic concrete poem. A placard explains that the piece, which Vicuña made in collaboration with filmmaker Robert Kolodny, refers to “the death of the sea” and its beginnings as a cradle for this planet’s earliest bodies. For Vicuña, water is sentient, as much a record keeper and a messenger as a quipu. In the interview, she translates concón as “water water, or it means consciousness consciousness.” Her words on the subject decorate a wall at the entrance: WATER COMES FROM SOUND / SOUND COMES FROM WATER... / A MEMORY OF DROUGHT AND CATACLYSMS LIVES IN THE ENTANGLEMENT. Below them is an example: WATER WAS PRIVATIZED IN CHILE IN 1988, TRANSFERRING STATE OWNERSHIP OF ASSETS TO THE PRIVATE SECTOR. NOW PRIVATE COMPANIES DIVERT THE LIVING WATERS AND RETURN THEM DEAD. If water is living, it can be stripped for capital, and it can die.

Vicuña’s “Precarios” echo this notion. Many are displayed here atop a patch of sand, evoking equally the ground and that which pollutes it. Memorials to the casualties of ecological destruction, these are also resurrections. Young visitors often want to play with them, and in short films such as Symbiosis (Ritual Battle), 2015, Vicuña herself animates them with her hands. She has reiterated that the sculptures belong to the oceans from which many of their parts were collected and will not be fully complete until the sea once again embraces them. The earth remembers what invades it, and the two remain forever in dialogue.

The exhibition’s centerpiece, Balsa Snake Raft to Escape the Flood, 2017, suspended from the ceiling, is made of a loose wooden base and pendulous flotsam: a peppermint-striped rubber ball, bird feathers, nautical rope. It’s as much a monument as the smaller “Precarios,” but more admonitory: Our collective disregard for water, which we ravage with refuse, will force us to deal with its subsequent rise. The sheer volume of debris in the work is a marvel, and Vicuña renders it sublime. To escape on this raft would be to surrender with acceptance. Like the detritus, we’d return to the sea, become ancestors ourselves.

Source
Back to Top