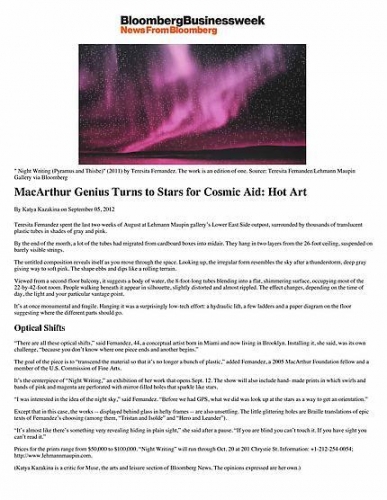 Teresita Fernandez spent the last two weeks of August at Lehmann Maupin gallery’s Lower East Side outpost, surrounded by thousands of translucent plastic tubes in shades of gray and pink.

By the end of the month, a lot of the tubes had migrated from cardboard boxes into midair. They hang in two layers from the 26-foot ceiling, suspended on barely visible strings.

The untitled composition reveals itself as you move through the space. Looking up, the irregular form resembles the sky after a thunderstorm, deep gray giving way to soft pink. The shape ebbs and dips like a rolling terrain.

Viewed from a second-floor balcony, it suggests a body of water, the 8-foot-long tubes blending into a flat, shimmering surface, occupying most of the 22-by-42-foot room. People walking beneath it appear in silhouette, slightly distorted and almost rippled. The effect changes, depending on the time of day, the light and your particular vantage point.

It’s at once monumental and fragile. Hanging it was a surprisingly low-tech effort: a hydraulic lift, a few ladders and a paper diagram on the floor suggesting where the different parts should go.


“There are all these optical shifts,” said Fernandez, 44, a conceptual artist born in Miami and now living in Brooklyn. Installing it, she said, was its own challenge, “because you don’t know where one piece ends and another begins.”

The goal of the piece is to “transcend the material so that it’s no longer a bunch of plastic,” added Fernandez, a 2005 MacArthur Foundation fellow and a member of the U.S. Commission of Fine Arts.

It’s the centerpiece of “Night Writing,” an exhibition of her work that opens Sept. 12. The show will also include hand- made prints in which swirls and bands of pink and magenta are perforated with mirror-filled holes that sparkle like stars.

“I was interested in the idea of the night sky,” said Fernandez. “Before we had GPS, what we did was look up at the stars as a way to get an orientation.”

Except that in this case, the works -- displayed behind glass in hefty frames -- are also unsettling. The little glittering holes are Braille translations of epic texts of Fernandez’s choosing (among them, “Tristan and Isolde” and “Hero and Leander”).

“It’s almost like there’s something very revealing hiding in plain sight,” she said after a pause. “If you are blind you can’t touch it. If you have sight you can’t read it.”

www.bloomberg.com
Back To Top