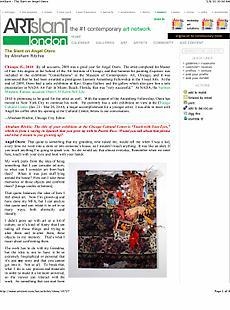 Chicago, IL, 2010: By all accounts, 2009 was a good year for Angel Otero. The artist completed his Master of Fine Arts degree at the School of the Art Institute of Chicago, and that Summer his painting Exquisito was included in the exhibition "Constellations" at the Museum of Contemporary Art, Chicago, and it was announced that he had been awarded a prestigious Leonore Annenberg Fellowship in the Visual Arts. At the end of 2009, Otero had a solo exhibition at Kavi Gupta Gallery and the gallery which also gave him a solo presentation at NADA Art Fair in Miami Beach, Florida, that was "very successful." At NADA, the Nerman Museum, Kansas, acquired Otero's 10 Karat Still Life.

2010 is promising to be good for the artist as well. With the support of the Annenberg Fellowship, Otero has moved to New York City to continue his work. He currently has a solo exhibition on view at the Chicago Cultural Center (Jan 23 - Mar 28,2010), a major accomplishment for a younger artist. I was able to meet with Angel for coffee after his opening at the Cultural Center, below is our conversation.
--Abraham Ritchie, Chicago City Editor.

Abraham Ritchie: The title of your exhibition at the Chicago Cultural Center is "Touch with Your Eyes," which is from a saying in Spanish that you grew up with in Puerto Rico. Would you talk about that phrase and what it meant to you growing up?

Angel Otero: That quote is something that my grandma, who raised me, would tell me when I was a kid, every time we went into a store or into someone's house, so I wouldn't touch anything. It was like an alert, If you touch anything I'm going to spank you. So she would say that almost everyday, Remember when we enter here, touch with your eyes and look with your hands.

My work parts from the idea of being something that I can consider art now, to what can I consider art from back then? When it was just stuff lying around the house? How can I take those memories or those objects and confront them?

That quote balances the idea of how I feel about art. Now I'm grown-up and have done my MFA, but I can analyze that quote and can relate it to art in so many ways, both abstractly and literally.

I didn't grow up with art or a lot of culture, so it's kind of funny that I am taking all these things and trying to alter them and re-alter them, these objects in my memory. That's what I mean about confronting them.

The work has to do with my Grandma, but the idea is not to have it be so extremely biographical or personal that it's just my story and that you cannot get into it. Not at all. To break that, what I do is use process and materials in order to make it a lot more universal, so the viewer can interact with the work. So something that can start from the memory of the table in my Grandma's house, which she would always keep messy, a lot of flowers and dead flowers on it, kind of disgusting in a way. I want to take these things and convert them into a more abstract bunch of conversations between narrative, abstraction and materials. A lot of the work is towards an object and what I paint is objects. I treat the work in a three-dimensional way; it has a more 3D approach than 2D.

Abraham Ritchie: It's been great to see still lifes that I become really engaged with. Still life is such a historical genre, so it's been interesting to see it presented in a new light. A lot of your paintings are overtly sculptural, sometimes with objects coming off of them.
So getting back to what you were just talking about, how do you address the tension between the two dimensional and the three-dimensional? It seems to me that for you this isn't really a binary like they might be for other people, one can bleed over into the other one. How do you approach putting a sculptural element into painting? How do you evoke that physicality in your work?

AO: I'll be honest I'm a workaholic freak in the studio. I have so many materials in the studio and sometimes I don't even know why I have them there, but I have the feeling that they will help towards the art making or the process.

In the process of some pieces I get ideas for new work. It may not have anything to do with my past, Puerto Rico, or Grandma, but art history.

For example a work like 10 Karat Still Life I have over there [gestures to the Chicago Cultural Center], it's more a piece that plays with art history in terms of the still life. Everything is done in oil paint but the oil is treated in different way. A lot of people will tell me, Angel you can use acrylic or there are so many other ways to make that effect of the gold squares. Of course I know this, I could make them perfect squares if I wanted to, but that's not the point. The point is to make the piece look a little bit like a wannabe.

For this still life, I created it, and then I cut square pieces from dried oil paint, spray painted them in gold and collaged them. Not to make a mosaic, at all, but to make the illusion of a fabric that would be under these flowers. And everything is made in oil paint, like any other traditional still life.

The work as a group, as a body of work, is a back-and-forth, between the narrative of my personal background and the process of the work itself.

AR: So you're using paint itself as a kind of meeting place? Like you were saying before, we may not know all of your personal story but everyone can relate to paint.

AO: Not purposely really. I don't think ''I'm going to paint this so people can relate," not at all. Painting is my fun part, you know?

But I do realize that it's the biggest part in the work where people can get attached to it, because they will start thinking about how things were made, what's real and what's unreal. They can read, in some way, the subject matter and the narrative too.

AR: I think that's a really interesting way to use paint, as a leveling device. I don't know if we talk about that as much anymore, that everyone can have a visual experience with oil paint, no matter who you are or where you are from.

That idea reminds me of what I've read about your influences from Abstract Expressionism. I don't know if that's immediately apparent to me in your work so I'd be really interested to hear more about that influence.

AO: I'll be honest, I came to Chicago after a very poor program of contemporary art at the University of Puerto Rico. I came to [the School of the Art Institute of Chicago] and went to a class and they asked me who was my favorite contemporary artist and I ended up saying Jackson Pollock. Everyone started laughing, because he's dead, you know?

But that's what I grew up with, the idea of the bohemian, the New York School, the messy, macho, Abstract Expressionist-looking thing.

My paintings in school were oil on canvas and professors would ask me what they were about and I my only answer was "I love to paint," because at that point I didn't know what the fuck I was doing. I was just imitating this beautiful work.

I think it stayed with me for a little while, and I kept on doing other types of work.

But the abstract expressionist part of me took a place. Obviously you see some splattering in some pieces. The stems of the flowers are very ...

AR: So it was an earlier influence, that may be still with you in some degree but you have moved past it now?

AO: Exactly, because it is still with me. I'm addicted to paint and brush painting and the white canvas before me. I love it.

It's different for me to make a piece like these ten-karat pieces, or some other ones, because the process is so tedious. It takes so much time, it fails a lot of times in different ways, and then in other ways it's amazing. The results, when I step back, are like "Damn that looks so beautiful."

I do recognize that part of me just wants to grab a brush and paint my ass off. But I like more to step into the place that I do not know if I enjoy it, because that's the place where you can encounter what you never expected, the surprises. It's the street you never thought that you would take, but all of a sudden it can be beautiful too.