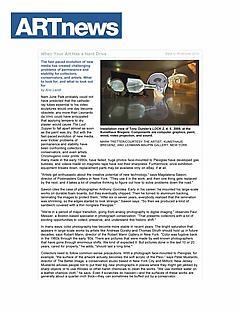 When Your Art Has a Hard Drive
Ann Landi

Nam June Paik probably could not have predicted that the cathode-ray tubes essential to his video sculptures would one day become obsolete, any more than Leonardo da Vinci could have anticipated that applying tempera to dry plaster would cause The Last Supper to fall apart almost as soon as the paint was dry. But with the fast-paced evolution of new media, ever trickier problems of permanence and stability have been confronting collectors, conservators, and even artists. Chromogenic color prints, like many made in the early 1990s, have faded; huge photos face-mounted to Plexiglas have developed gas bubbles; and videos made on magnetic tape have lost their sharpness. Furthermore, once exhibition equipment breaks down, replacement parts may be available only on eBay, if at all.

"Artists get enthusiastic about the creative potential of new technology," says Magdalena Sawon, director of Postmasters Gallery in New York. "They use it in the work, and then one thing gets replaced by the next, and it takes a lot of creative thinking to figure out how to solve problems down the road."

Sawon cites the case of photographer Anthony Goicolea. Early in his career, he mounted his large-scale works on durable foam boards, but they eventually chipped. Then he turned to aluminum backing, laminating the images to protect them. "After six or seven years, everybody realized that the lamination was shrinking, so the edges started to look strange," Sawon says. "So then we produced a kind of sandwich covered with a thin nonglare Plexiglas."

"We're in a period of major transition, going from analog photography to digital imaging," observes Paul Messier, a Boston-based specialist in photograph conservation. "That presents collectors with a lot of exciting opportunities to collect, preserve, and understand this historic shift."

In many ways, color photography has become more stable in recent years. The bright saturation that appears in large-scale works by artists like Andreas Gursky and Thomas Struth should hold up in future decades, says Robert Mann, director of the Robert Mann Gallery in New York. "Color was fugitive back in the 1960s through the early '80s. There are pictures that were made by well-known photographers that have gone through enormous shifts. We kind of expected it. But pictures done in the last 10 or 20 years, cared for properly," he adds, "should last a long time."

Collectors need to follow common-sense precautions. With a photograph face-mounted to Plexiglas, for example, "the surface of the artwork actually becomes the soft acrylic of the Plexi," says Peter Mustardo, director of The Better Image, a conservation studio based in New York City and Milford, New Jersey. Mustardo advises people not to put their big new photographs in places where they might get jabbed by sharp objects or to use Windex or other harsh chemicals to clean the works. "We use distilled water on a leather chamois cloth," he says. Even if scratches do happen—and the surfaces of these works are generally about a quarter-inch thick—they can sometimes be buffed out by a conservator.

Controlling exposure to light is key to the longevity of photographs. "You need to put in ultraviolet filtering to control the lighting from the source," says Mann, "and even natural lighting should be controlled." Keeping works in a good storage ­facility—a cool, dry place, protected from light—is also important, counsels Nora Kennedy, Sherman Fairchild Conservator of Photographs at the Metropolitan Museum of Art. "When I talk to private collectors," she adds, "I try to recommend that they have rotating exhibitions, so that works aren't on view for long periods of time. Damage from light can build up, so that if you leave a photograph up for ten years, you may see changes. And it's always good to show work in rooms where there are no large windows."

"As private collectors, we choose to live with the work and enjoy it and not treat it under absolutely pristine conditions," says Miami-based collector Dennis Scholl, who owns more than 300 photos and about 60 video works. "We rotate our collection all the time, but there's no reason to get really compulsive about protecting the work. There's always going to be some degradation, and that will be the problem of the museum I give it to someday. We're just interim stewards." Lending to exhibitions, he adds, can be wearing on newer kinds of media. "But if you're going to be a collector of young work, you have an obligation to the artist to make sure it gets seen."

A different set of issues comes into play with what have come to be known as time-based media—video art of all kinds. Video "needs constant management in storage, unlike a painting or sculpture," says Glenn Wharton, media conservator at the Museum of Modern Art. "And that management consists of migrating the moving images from one format to another. Which means, with video, we might need either to transfer it to new stock, like magnetic tape, or we might digitize it, in which case we end up with an electronic file. That kind of active management needs to be done with a private collection as well."

Another concern is exhibition equipment—the projectors, screens, and playback technology. "That too can become damaged or obsolescent or difficult to repair, and components may need to be replaced," adds Wharton. A museum can fortify itself by buying additional equipment for exhibiting the art. "We sold a work by Jennifer and Kevin McCoy to the Met," recalls Sawon. "It was a video in a CD format, the technology before DVDs. There was a player built into the piece, and it was a visual part of how the work looked. The museum bought a number of those players, in addition to the one that was in the piece, at our suggestion, so that if one player breaks down, there is the next one and the next one."

As computer technology continues to evolve, Sawon notes, "You solve things any which way you can." In some cases, it may be wise to plan for the kind of problems that confront collectors of early video pieces like those of Nam June Paik. The Seattle-based artist Gary Hill cites the example of his work Inasmuch As It Is Always Already Taking Place (1990), in the collection of the Museum of Modern Art. "It consists of 16 cathode-ray tubes of various sizes, which have been ­removed from their chassis," he says, "and due to the nature of the work, the bulbous ‘naked' quality of the tubes makes it crucial that the piece be displayed with them. That is, they're not just hardware but rather sculptural elements of the piece, including the long tentacle-like cabling connected to them.

"I would imagine the components will be made for another ten years or so," he adds, "and at that point, you either let it go or you do whatever you can to stabilize it. That's simply the nature of decay."

Artists are sometimes adamant that their art be shown in the original media, no matter how beguiling the changes in technology or how threatening the prospect of obsolescence. Pamela Kramlich of San Francisco, who, with her husband, Richard, owns one of the largest collections of time-based media in the world, cites the case of a work by Tacita Dean recently on view in the exhibition "Haunted" at the Guggenheim Museum. Dean "insists on her work being shown in the film in which it was created," says Kramlich, "and we have to promise that we will always do that. Certain artists have very strict rules. In other cases, artists aren't particular at all."

"I don't want to go into a digital format, because it's a totally different medium and the look would change," says Dean. "Film and analog photography have been around for much longer than DVDs. They look quite doomed at the moment, but I have great faith that won't be the case." Dean believes that when images made on film are transferred to a digital format, they "lose an enormous part of their quality."

Other artists embrace the new. "When I first started in the early 1990s, the projectors I used were extremely dim and very pixelated and had almost like a Benday dot effect," says Tony Oursler. As time goes by, and he migrates the original pieces to newer technology, the work gets brighter and clearer. "I never intended my work to be shown in totally darkened rooms, but because the early projections were relatively dim, people sometimes ended up showing them in complete darkness. For me, it's been very fortunate because these can now be seen in a brighter light with the newer technology," Oursler says.

Computer-based work raises similar problems. "If you made something in the late '70s or early '80s, and you're showing it in 2010, there are easier ways to show it than the cumbersome ways we sought out early on," says artist Lynn Hershman Leeson, much of whose practice is devoted to online art. "I made the decision to migrate the works to more efficient forms of showing them, upgrading to a newer computer or streamlining the software so it does the same thing but in a more efficient way."

One advantage of computer-based work is that it can be conserved in code instead of kept in storage. Steven Sacks, director of Bitforms Gallery in New York, says, "In the worst-case scenario, let's say a hundred years from now, when there's no way that the software will work, there will be people who will be able to decipher the code in which it was written and then emulate the experience."

When buying work in a new and unfamiliar medium, dealers and conservators say, it's best to consult the artist and/or the dealer to understand the technology involved. Both the Museum of Modern Art and the Metropolitan in New York have developed standardized questionnaires that must be filled out when a work is acquired. Conservation issues are discussed in detail early in the game. "I'll sit down with the artists and talk to them about the technology they've used to create their work, the technical history," says Wharton, "so that I know exactly what we're getting, what kind of equipment we need to show the piece."

Some artists are vigilant about giving collectors similar information to keep a piece in top form. Oursler, for example, offers a fact sheet detailing all of a work's parts, how the work might change, and what it may cost to replace the components. "I try to make everything as easy as possible," he says. "My work is not just something you can hang on a wall. You have to put in a little bit more energy, and pay more attention. But when it comes from my studio, I want repairs or upgrades to happen as quickly and painlessly as possible."

The collector can also consult with a conservator, but most say that when problems arise, the person to talk to is the maker. More and more artists are adopting the attitude of Oursler, who hires assistants to take care of any problems connected with his art.

If all of this sounds like an enormous headache, consider collecting on the cutting edge to be an adventure. "You need to be informed, and the only way to stay informed is to talk to other people," says Rudolf Frieling, curator of new media at the San Francisco Museum of Modern Art. "You can't just store the art, put it on a shelf, and forget it for the next ten years. And then say, ‘Oh, we haven't shown this for so long, let's look at it now.'

"There is much more of a sense of continuity, of commitment," he adds, "and the beauty is that this is also a positive quality. It keeps you engaged."