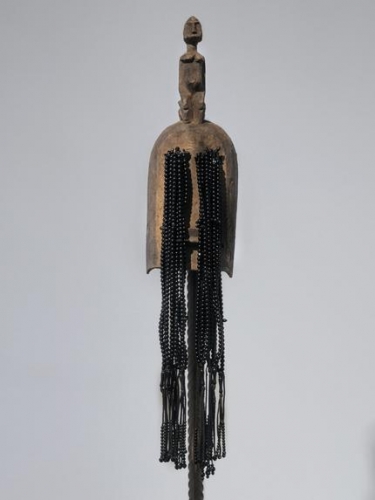 According to the dictionary an oxymoron is a figure of speech in which seemingly contradictory terms are syntactically conjoined, like the words “alternative” and “facts,” often to ridiculous effect. The French-Algerian artist Kader Attia, has explored similarly strange juxtapositions in his latest multimedia exhibition at Lehmann Maupin, a gallery on the Lower East Side. In a video installation titled Reason’s Oxymorons, Attia presents eighteen interviews with a number of remarkably erudite men and women. Their insights, incongruously, are found inside a maze of soul-sucking cubicles.

It’s fair to say that Kader Attia is having a moment. The Paris-born artist, who is known for his work on the legacy of colonialism, was awarded the prestigious Prix Marcel Duchamp last October. His second exhibition at Lehmann Maupin coincides with his work being on view at Paris’ Centre Georges Pompidou, as well as with a solo show this month at the Block Museum of Art in Evanston, Illinois. Additionally, the artist recently unveiled his own “independent” art space in a well-known immigrant neighborhood in Paris, while simultaneously organizing a special curatorial project for the 13th Sharjah Biennial in Dakar, Senegal. Also, he is due to open a solo exhibition at the Museum of Contemporary Art in Sydney in April. One more event and the man will be forced to clone himself.

Attia considers himself primarily a sculptor, but he has long used unconventional materials to explore how non-Western people construct their identities in the face of the West’s cultural hegemony. Last May at New York’s Guggenheim, Attia built a scale model of the historical Algerian city of Ghardaïa using nearly eight hundred pounds of couscous. Shown alongside portraits of the architects Le Corbusier and Fernand Pouillon—as well as a UNESCO document designating Ghardaïa a World Heritage Site—his boiled pasta sculpture exposed the raw deal the West routinely offers so-called “subaltern cultures.” Despite the fact that Ghardaïa inspired some famous French apartment blocks built by the celebrated modernists, neither the city nor its architecture received so much as an ounce of credit. (In an ironic twist, those same apartment blocks now house mostly North African immigrants.)

Besides architecture, Attia frequently employs various fields of learning, including medicine, philosophy, psychoanalysis, history, and political science, to reveal the invisible yet stubborn strands that lash together Western and non-Western cultures. His aim, as relayed to curators and journalists throughout his career, is to help repair social injuries that are both centuries old and planetary.

Like Ta-Nehisi Coates, the author of The New Jim Crow, Attia makes an argument both for “repair” and reparations. Besides financial restitution, the artist also aims to address wounds that are psychic, historical, linguistic and personal. In his latest show, Attia locates a number of these conflicts within the lockbox of language. As a result, he suggests that many of the contradictions (or oxymorons) bedeviling Western and non-Western societies manifest themselves at both the root and branches of knowledge.

Reason’s Oxymorons is introduced by a half dozen conventional-looking sculptures made from found materials. Arrayed on two floors, they use cast-off elements like mirrors, plywood, old shoes, cotton fabric, rebar, and traditional masks to express the powerful transference that occurs when, say, African or Latin American makers integrate Western components into their objects. For Attia, mixed or patched objects like these symbolize resistance and ingenuity. “Repair and hybridization are the terrain where many cultures begin to take back their liberty,” the artist told The New York Times in 2013. Besides sounding perfectly cutting-edge, Attia also echoes the Brazilian poet Oswald de Andrade—the father of postcolonial aesthetics and author of the 1923 “Cannibal Manifesto.”

The exhibition’s pièce de résistance is, of course, the show’s title work, which Attia presents for the first time in the U.S. (the installation was originally exhibited at the 2015 Biennale de Lyon). An expansive video library shoehorned into the cramped hell of multiple office cubicles, it contains eighteen videos that feature interviews with philosophers, ethnologists, historians, psychiatrists, psychoanalysts, musicologists, patients, healers, fetishists and griots conducted in several countries. The videos deal with wide-open concepts, like “Modernity, “Art as Therapy,” “The Unconscious,” “Trance” and “Genocide.” The idea of the installation is to present an encyclopedia of juxtapositions that compare academic Western and non-Western ideas on what it means to be human. To paraphrase a recent New Yorker cartoon, I love the chalk talk, it’s the cubicles I find demoralizing.

As revealed in Attia’s interviews, the West’s antiseptic touch resembles the installation’s Herman Miller cubicles to a T when conversation turns to the globe’s current humanitarian dilemmas—immigration, assimilation and the refugee crisis. In one, a French clinical psychologist confesses that, unlike most conventional approaches, he has reoriented his work with mentally ill immigrants to focus on the “reconstruction of their identities” rather than on the symptoms of “their current clinical state.” In another, a Rwandan-born, Paris-based psychotherapist who specializes in refugees quotes Primo Levi on the shame of being human. “I’m not afraid of being a monster,” she says, “I’m afraid of bureaucrats who incite people to murder.”

A meandering but insightful essay on traditional and non-traditional psychiatry—among other worthy themes—Reason’s Oxymorons points to huge gaps in understanding between Western and non-Western societies, but also to the vast structural inequities that undergird these conflicts. In this view, cubicles are not just office décor, they’re the furniture of the mind.

artnet
Back to Top