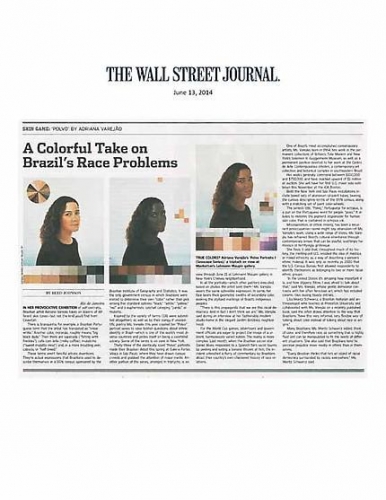 
In her provocative exhibition of self-portraits, Brazilian artist Adriana Varejão takes on dozens of different skin tones—but not the kind you'd find in a box of CoverGirl.


There is branquinha, for example, a Brazilian Portuguese term that the artist has translated as "snow white." Another color, morenão, roughly means "big black dude." Then there are sapecada ("flirting with freckles"), cafe com leite (milky coffee), mulatinha ("sweet mulatto miss") and, in a more troubling vein, cabocla, or "half-breed."


These terms aren't fanciful artistic inventions. They're actual expressions that Brazilians used to describe themselves in a 1976 census sponsored by the Brazilian Institute of Geography and Statistics. It was the only government census in which Brazilians were invited to determine their own "color," rather than pick among five standard options: "black," "white," "yellow," "red" and a euphemistic catchall category, "pardo," or mulatto.


Inspired by the variety of terms (136 were submitted altogether), as well as by their slangy if unscientific poetry, Ms. Varejão this year created her "Polvo" portrait series to raise ticklish questions about ethnic identity in Brazil—which is one of the world's most diverse countries and prides itself on being a colorblind society. Some of the series is on view in New York.


Thirty-three of the identically sized "Polvo" portraits made their Brazilian debut this spring at Galeria Fortes Vilaça in São Paulo, where they have drawn curious crowds and grabbed the attention of major media. Another portion of the series, arranged in triptychs, is on view through June 21 at Lehmann Maupin gallery in New York's Chelsea neighborhood.


In all the portraits—which other painters executed, based on photos the artist sent them—Ms. Varejão wears the same sphinxlike expression. In some, her face bears thick geometric swaths of secondary color, evoking the stylized markings of Brazil's indigenous peoples.


"There is this propaganda that we are this racial democracy. And in fact I don't think we are," Ms. Varejão said during an interview at her fashionably modern studio-home in the elegant Jardim Botânico neighborhood.


For the World Cup games, advertisers and government officials are eager to project the image of a vibrant, harmoniously varied nation. The reality is more complex. Last month, when the Brazilian soccer star Daniel Alves responded to a Spanish fan's racist taunts by peeling and eating a banana thrown at him, the incident unleashed a flurry of commentary by Brazilians about their country's own checkered history of race relations.


One of Brazil's most accomplished contemporary artists, Ms. Varejão, born in 1964, has work in the permanent collections of Britain's Tate Modern and New York's Solomon R. Guggenheim Museum, as well as a permanent pavilion devoted to her work at the Centro de Arte Contemporânea Inhotim, a contemporary-art collection and botanical complex in southeastern Brazil.


Her works generally command between $100,000 and $750,000, and have reached upward of $1 million at auction. She will have her first U.S. major solo exhibition this November at the ICA Boston.


Both the New York and São Paulo installations include boxed sets of aluminum oil-paint tubes, bearing the curious descriptive terms of the 1976 census, along with a matching set of paint color-wheels.


The series' title, "Polvo," Portuguese for octopus, is a pun on the Portuguese word for people, "povo." It alludes to melanin, the pigment responsible for human skin color, that is contained in octopus ink.


Miscegenation, or ethnic mixing, has been a recurrent preoccupation—some might say obsession—of Ms. Varejão's work. Using a wide range of styles, Ms. Varejão has reframed Brazil's cultural inheritance through contemporary lenses that can be playful, scathingly humorous or terrifyingly grotesque.


She finds it odd that, throughout much of its history, the melting-pot U.S. resisted the idea of mestiça, or mixed ethnicity, as a way of describing a person's ethnic makeup. It was only as recently as 2000 that the U.S. Census Bureau first allowed respondents to identify themselves as belonging to two or more racial-ethnic groups.


"In the United States it's amazing how important it is, and how slippery. Wow, I was afraid to talk about that," said Ms. Varejão, whose gentle demeanor contrasts with her often ferocious art, which has included ceramic tiles oozing bloody entrails.


Lilia Moritz Schwarcz, a Brazilian historian and anthropologist who teaches at Princeton University and collaborated with Ms. Varejão on a recently published book, said the artist draws attention to the way that Brazilians "have this very informal, very flexible way of talking about color instead of talking about race or origins."


Many Brazilians, Ms. Moritz Schwarcz added, think of color, and therefore race, as something that is highly fluid and can be manipulated to fit the needs of different situations. She also said that Brazilians tend to perceive prejudice more readily in others than in themselves.