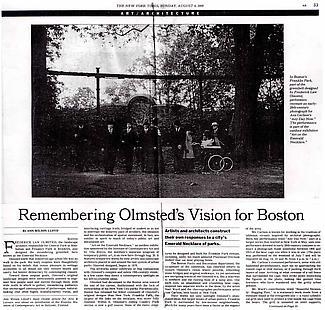 Olmsted knew that industrial urban life was no walk in the park. His leafy respites were
thoughtfully based on his beliefs that scenic pleasure in settings accessible to all would
not only restore health and sanity, but boister democracy by commingling classes.

Toward these utopian goals, Olmsted's original landscape designs were meticulously
planned to engineer how people used and moved through them, with wide malls in which to gather, meandering pathways that encouraged contemplation of picturesque,
natural-looking (but often highly manufactured) vistas, interlacing carriage trails, bridged or sunken so as not to interrupt the leisurely pace of strollers. His idealism and his orchestration of spatial movement, in fact, are similar in spirit to much of today's public art and installation art.

"Art on the Emerald Necklace," an outdoor exhibition sponsored by the Institute of Contemporary Art and by Vita Brevis the institute's separate program of temporary works by nine artists and landscape architects placed in and around the last system of urban parks Olmsted designed, begun in 1876.

The artworks either celebrate or bed comparison with Olmsted's complex and subtle 19th-century vision; in a few cases they direct a contemporary spotlight on his left-to-crumble ideas.

Olmsted had decamped to the Boston area toward the end of his career, disillusioned with the lack of stewardship of his New York City parks. Paradoxically, Boston has retained far fewer remnants of Olmsted's original designs than New York. Franklin Park, the largest of the links on the necklace, was never fully realized. Within it, Olmsted's rolling Country Park section is now a golf course. None of the rustic structures he designed and built for Franklin Park remain, including, sadly, his much admired Playstead Overlook shelter that sat near playing fields.

The Boston Parks and Recreation department, the co-sponsor of the exhibition, has renewed efforts to restore Olmsted's vision where possible, rebuilding stone bridges and original walkways. As yet unrestored are intriguing traces of the Olmsted era, like a stairway to nowhere and the rusting base of lamp post. One such ruin, an abandoned and crumbling bear cage, inspired two separate works in the show, by the artist Nari Ward and the choreographer-performance artist Ann Carlson, both based in New York.

Their works not only spotlight Olmsted's abandoned ideas of urban politics. Franklin Park is surrounded by low-income neighborhoods, which for many years have been a factor in the neglect of the area.

Ms. Carlson is known for working in the tradition of tableaux vivants inspired by archival photographs. Here, her performance titled "Any Day Now," part of a larger series that started in New York in May, uses nine performers dressed in early 20th- century costume to reenact a photograph made sometime between 1905 and 1915 of the bear cage site when it was in use. (The piece was performed on the weekend of July-7 and will be repeated on Aug. 18, 19 and 20, from 5 p.m. to 7 p.m.)

Ms. Carlson's costumed performers, some with old-fashioned perambulators, start out by approaching the ruined cage in slow motion, as if pushing through thick layers of time. Arriving at what remains of a tall fence that surrounded the cage, they strike poses mimicking the figures in the photo, Iooking Iike genteel time travelers who hove wandered into the gritty urban present.

Mr. Ward's contribution, titled "Beautiful Necessity: Hugging Post" is a stationary work made from remnant found at the overgrown site - a rusty cylindrical once used to protect a tree inside the cage from the bears. The grill is mounted on steel supports, creating an airy tower.

Visitors may stand inside, where it's presumed they should hug someone, Mr. Ward's 21st-century expression, perhaps, of Olmstead's commingling.

Olmsted would likely disapprove, however, of the flimsy flower boxes at the base of Mr. Ward's installation, since he famously preached against ornaments like flower beds and specimen plantings. Espousing minimal intervention, he believed the soothing, blended texture of a natural landscape was most redemptive to the human spirit-sparing no effort, meanwhile, to achieve his un-fussed with look.

The British artist Cornelia Parker has also taken a minimalist turn with her sly conceptual pieces, both titled "At the Bottom of This Lake." Her works also contain subtle Ideas of redemption, though of cultural artifacts, not spirits.

At two separate water features in the Emerald Necklace system, Leverett Pond in Olmsted Park and the Back Bay Fens Lagoon near the Museum at Fine Arts, Ms. Parker has placed four bronze plaques just off shore. The two at Olmstead Park read: "At the bottom of this Iake lies a fragment of a star. At 1:15 a.m. on the 28th of June In the year 2000, a chondrite meteorite fell into Leverett Pond."

Just as unaware viewers buy Into Olmsted's "natural" beauty of rearranged boulders, excavated pond, and rolling meadows created via tons of relocated earth, those reading Ms. Parker's plaques would assume they marked a rather mythic, natural celestial event. But Ms. Parker's stars fell from her own hand, not the sky; even more mundanely, the meteorites were purchased from the Internet auction site eBay. All of which adds a nice high-tech echo to Olmstead's unbashed use of artifice and industrial-age technology to create his own mythic pastoral vision.

Nearby is Ward's Pond, where the installation "Emanations," by the New York artist James Boorstein spans an even greater divide between minimal effect versus prodigious effort. Nothing may be visible upon reaching this small, secluded kettle-hole pond. Eventually, something erupts in the pond's middle, but it's easily missed Gentle ripples radiate, as if a stone has been thrown, and then another plop, more ripples-and that's about it.

Except for the elaborate workings below the surface, where les the first circular-wave machine, invented by Mr. Boorstein with the help from scientists at the Woods Hole Oceangraphic Institute and private naval engineers.

Three tripods about six feet tall rest on the pond's bottom. The motion of this device causes a vortex to be formed in the water, which sends out the ripples. When the pond is low, water rushes in to fill the hole and collides with itself, causing the eruptions. Higher water levels result only in ripples. One can't help but wonder what Olmsted, who envisioned people using his parks for bucolic pleasures like skipping stones , would think of Mr. Boorstein's automatic ripple-making appartus.

High winds during a recent storm unfortunately damaged an installation by the Boston-based collaborative architectural team of Sheila Kennedy and Frano Violich called "Common Pleasures:Parkway," the work has since been removed (and may be partly reinstalled soon), but while up, it offered a post modern take on the whole idea of bucolic pleasure.

Situated on the Arborway, a busy overpass that Olmstead foresaw as a tree-lined link between Franklin Park and the nearby Arnold Arboretum, the installation lent a bit of perfunctory nature to one of those pedestrian no-man's lands that modern cities spawn.

Alongside whizzing traffic, on a sidewalk difficult if not dangerous to get to, stood a row of 40 large panels of chain-link fencing. An open bag of potting soil lay at the base of each, out of which sprouted tomatoes, beans and nasturtiums, climbing the fencing. Large interspersed drums held water used by volunteers to care for this unlikely garden. Though its unprotected setting proved to be its weakness, the artists looked at this broken link in Olmsted's necklace and saw opportunity: a grand stage, high visibility, southern exposure and with a nod to Olmsted's fondness for distant vistas, a great view of downtown Boston.

Like Ms. Carlson, Ellen Driscoll of Cambridge, Mass., and Barnaby Evans of Providence, R.I., also opted for scheduled events rather than installed works in a project Ms. Driscoll has titled "Meanderlink," she has hired am aviation service to tow a large colorful banner high above the park system's chain of sites, on Saturdays and Sundays between 5 and 7 p.m., ending next Sunday. A handout brochure, available at the Institute of Contemporary Art, complements the flyover.

The spiraling imagery on both the banner and the handout were inspired. Ms. Driscoll says, by Olmsted's meandering paths. In addition, she wrote an essay, recently published by the Boston Globe, in which she praised Olmsted's vision of nature in service to communities and explained her own motives: "I intend to arouse the spirit of communicativeness by enticing people to look up-out of themselves and into the sky." Indeed, seen from downtown Boston on a warm summer evening, the banner fits in and out behind office towers like a bright butterfly.

Mr. Evans's project, "Moving Water," refers to a hydro-engineering problem Olmsted faced in his first Boston commission in 1875 that is still unresolved. A tidal flat along the Charles River, in the then newly filled Back Bay, had been designated parkland by the city, and Olmsted was asked to design it. Seeing a sewage-soiled mudflat instead of a potential park, Olmsted called it the Back Bay Fens. He worked with the engineers to create a system of basins and tidal gates to regulate tides and levels of Muddy River, the small steam flowing through the Fens into the Charles. Today further developments have cut off all water flow expect for storm drains. The area floods during heavy rains, and lies stagnant otherwise.

Mr. Evans, who is known in Providence for his popular Water Fire events on the river there, symbolically reconnected Boston's two rovers with a cordon of silvery trucks that scooped water from the Charles and carried it to the Muddy. These processions took place on three consecutive Saturday afternoons, the last on July 29.

The Institute of Contemporary Art will also publish a book next year that will include a photographic essay on the Emerald Necklace by the landscape architect Michael Van Valkenbourgh of Cambridge. The book, and this project as a whole will reintroduce Olmsted to Boston. How he felt about the power of nature and scenic landscape --
It's beauty has entered our souls, we know not exactly when or how," he wrote -- still seems well worth thinking about.