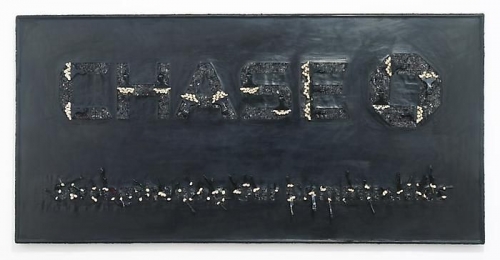 Over the course of the past decade, Nari Ward's large-scale sculptures and installations have often been invested in the local. At the 2008 Prospect. 1 biennial in New Orleans, for instance, his installation of a diamond-shaped structure made with damaged gym equipment seemed an appropriate reflection on the city's powerlessness in the wake of Hurricane Katrina. Ward's exhibition at the Isabella Stewart Gardner Museum in Boston in 2002 responded to the institution by exploring the staff's role as caretakers; and in 2000, during a residency at the Walker Art Center in Minneapolis, the artist held workshops in which he asked residents from several Twin Cities communities about the word home and then created a cagelike edifice based on the region's historic ice palaces, which stood in the Minneapolis Sculpture Garden for two years. For "LIVESupport," his solo debut at Lehmann Maupin Gallery, Ward focused on a single theme-the notion of aid evoked in the show's title-through a range of media including sculpture, video, and works on paper.

An ambulance titled Sick Smoke (all works 2010) created a tension between crisis and stasis, with its lights gently blinking, a blast of smoke occasionally filling its interior, and white vinyl stickers muting its original signage. As the first piece that Ward planned for the show, presumably with the debate over health-care reform in mind, it stood in contrast-also since it was the largest work on view-with the peculiar sculptures surrounding it. Yet all the works were united through the conceit of marking out, covering up, detouring, and otherwise transforming (mostly therapeutic) objects to make the appear at once strange and familiar. Wheelchairs had been make with seats from church pews; walking canes propped up a downward-facing telescope; and spheres were covered with pustules of ironed cotton balls, which resembled tiny cannonballs or some other sort of projectile.

Since 2000, Ward has lived and worked in Harlem and has gathered, as a contemporary bricoleur, the neighborhood's discarded clothes, ephemera, and trash for his work. A Chase Bank banner was repurposed into AfroChase, with the company's name, logo, and a motto-STRENGLENING OUR COMMUNITIES-depicted in gray felt home insulation adorned with hair picks and cowrie shells, an iconic early form of tender in West Africa as well as an emblem of fortune-telling and divination. Collapsing two symbols of power (however clichéd)-the corporation and Black Nationalism-the work effectively evoked the anxiety of the economic downturn through a single community's distress rather than its more abstract global effects.

The most coherent consideration of the used and abuses of support, however, was Father and Sons, the artist's first exhibited video. An investigation of the tensions between black youth and black police officers, this seamless, looped projection features two teenagers and a cop standing on the stage in Reverend Al Sharpton's National Action Network House of Justice on West 145th Street in New York. Rapid streams of tangled voices (I made out bits of a Miranda warning) accompany views of the boys' blank stares, rows of empty chairs, and disquieting moments in which their hands gently touch the officer's uniform. These scenes suggest a reversal of the NYPD's controversial "Stop-and Frisk" program, under which more than 575,000 people were "randomly" stopped on New York City streets last year, and so brings to mind the racial profiling endemic to the tactic. The more general suggestion that a house divided cannot stand seemed applicable to the entire exhibition, and-as the health-care bill was (finally) signed into law midway through the exhibition's run-seemed a salient reminder of the need for solidarity among local communities as wall as the nation s a whole.