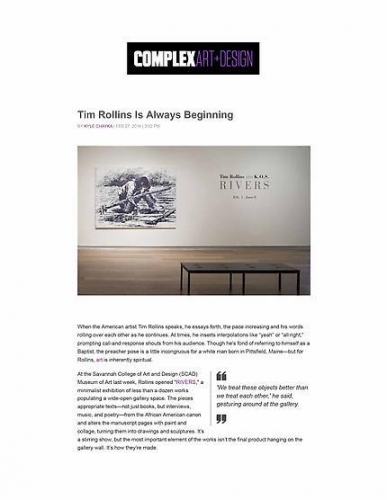 
When the American artist Tim Rollins speaks, he essays forth, the pace increasing and his words rolling over each other as he continues. At times, he inserts interpolations like “yeah” or “all right,” prompting call-and-response shouts from his audience. Though he’s fond of referring to himself as a Baptist, the preacher pose is a little incongruous for a white man born in Pittsfield, Maine—but for Rollins, art is inherently spiritual.


At the Savannah College of Art and Design (SCAD) Museum of Art last week, Rollins opened "RIVERS," a minimalist exhibition of less than a dozen works populating a wide-open gallery space. The pieces appropriate texts—not just books, but interviews, music, and poetry—from the African American canon and alters the manuscript pages with paint and collage, turning them into drawings and sculptures. It’s a stirring show, but the most important element of the works isn’t the final product hanging on the gallery wall. It’s how they’re made.


Standing in front of a crowd of SCAD students to give a short talk about "RIVERS," Rollins ended his sermon arguing that art’s purpose should be humanist, bringing people together rather than dividing them. “We treat these objects better than we treat each other,” he said, gesturing around at the gallery. “We keep them warm in the winter, cool in the summer”—unlike so many of the homeless or dispossessed in our country. Rollins’ strategy is to use his art not just to prompt social change but to actively create it.


For three decades, Rollins has made work in collaboration with Kids of Survival, a group of predominantly African-American children from the South Bronx, where he opened a communal studio after working as a teacher at Intermediate School 52, developing an art curriculum. Sitting at a table with two of his collaborators, who were young students when he met them and are now grown men, Rollins still seems a little surprised by the path his career has taken.


“It was a pretty rough school in a very treacherous neighborhood, but I fell in love with the kids,” Rollins explains. “I couldn’t stand the school, so after eight long years of being there every day, we started our own school, called the Art and Knowledge Workshop.” The workshop became known as Kids of Survival, which initially welcomed boys and girls to work with Rollins, but now focuses only on boys. “It started out as an after school school, then it became a fraternity, and now it’s a family,” Rollins says.


Rick Savignon and Angel Abreu are part of that family. The sharply-dressed pair have been in Kids of Survival for 28 years. Savignon met Rollins through a workshop at Legman College, also in the Bronx, where the artist was hosting a workshop to fund his K.O.S. studio. After the workshop ended, Rollins asked Savignon and his best friend to join the group. “He told us it was in the South Bronx, and my immediate reaction was, are you crazy I’m not going out there, he’s nuts!” Savignon recalls. “I stepped into the classroom and saw the current members of K.O.S. working, and I just fell into it. They welcomed me with open arms and from then on I’ve always been in the group.”


Abreu joined K.O.S. at the age of 11 in 1985. “As an 11-year-old walking into this situation, I didn’t know, it felt really organic, really natural,” he says. “It wasn’t until years later that I realized how extraordinary the whole thing was. For me it was natural—going after school, going to make some art, and some of the art is going to hang in galleries and museums.” Tim Rollins and K.O.S.—both names are usually credited on wall labels—have entered the collections of institutions like the Museum of Modern Art.


Going back to school was an unorthodox step for Rollins, who was firmly embedded in the upper echelons of the 1980s art scene. “All my friends in the art world—I was assistant to Joseph Kosuth, I knew Warhol, Rauschenberg—they went, are you out of your mind?” he says. But he was confident. “I knew deep down in my soul that we were gonna make history. I didn’t talk about it too much 'cause that’s kind of intimidating for 11, 12, 13-year-olds, right, but I did say—”


Angel interrupts, “You did say though! You did say we’re making history every day.”


Rollins responds, laughing, “And you’re like what? Who is this crazy white man?”


Though he doesn’t fall under the category of relational aesthetics—an amorphous contemporary art movement with Tino Sehgal as its star, that focuses on creating interactive situations rather than objects—Rollins makes the most impact by throwing disparate groups of people and ideas together and seeing what happens. With K.O.S., he introduced the cutting edge of conceptual art to inner-city students who had little access to any kind of art, let alone active contemporary artists. And the artist has found that intersection very fruitful.


For many of their exhibitions, Rollins and K.O.S. also work with local children attending schools near the galleries and museums, convening with them in a temporary studio to work on specific projects. For the Savannah exhibition, the group collaborated with students from Garrison Junior High School, a school of visual and performing arts in the city. “I said, don’t bring me your scholastic art award winners, bring the kids who need this—a boost, some encouragement, something to live for for a little while,” Rollins says. “The selection and diversity were so amazing. The vibe was actually pretty hilarious.”


The artist insisted that the team would work in a studio at SCAD, a lushly appointed, rapidly expanding college that serves as one of the centers of arts education in the American south. “I wanted the kids to have an experience of the college environment; now they can see themselves here,” Rollins says. It’s a form of encouragement that he got from his family early on. “My grandma worked in the commissary of Colby College in Waterville, Maine—I will never forget the day that she wanted me to come visit her, I loved it,” Rollins says. “She said, Timmy, I see you in a place like this. I was the first in my whole family to go to college.”


The Garrison collaboration became more fruitful than anyone expected. Though the workshops usually only focus on creating one series of work, this time, the team made three in as many days. They are also some of the most heartfelt pieces in the show. A printed page of Langston Hughes’s poem “The Negro Speaks of Rivers” is daubed with a single twisting stroke of watercolor paint, the sinuous arc of the language and the language’s object at the same time. Elsewhere, there are pages of music, the notes of Duke Ellington’s score for a ballet called “The River.” Each page is blackened with a tide of paint, rising up the staves like a flood.


Rollins describes his work as an attempt to help share a culture, helping kids who don’t have access to the heritage of African American art. With these textual artifacts comes education and repossession. Though Rollins’ objects can be beautiful and are often poetic, this learning experience is his greatest accomplishment. Rollins isn’t playing the savior—he is a collaborator through and through—but he feels there’s something in the history of African-American oppression in the United States to atone for. “The history of slavery is an American phenomenon, not just in the south,” he says. “It’s about owning up.”


“You can’t ignore it,” Savignon says.


“But you can’t steep in it, either,” Rollins responds. “The joy with young people is that you’re making art in the future tense. I’m not driving my truck looking through the back-view mirror,” he riffs. “We’re going straight ahead, runaway train—that’s why you make art. It’s a way to move on.” And just like that, Rollins and K.O.S. are always moving, circulating an ever-changing group of compatriots, changing lives, filling galleries. “I feel like we just started,” Rollins says. “After 30 years I feel like we’ve just begun.”