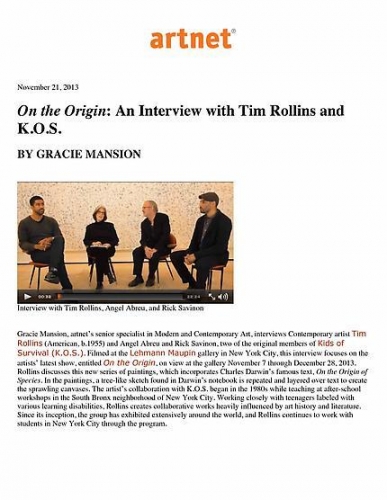 On the Origin: An Interview with Tim Rollins and K.O.S.
By Gracie Mansion


Gracie Mansion, artnet’s senior specialist in Modern and Contemporary Art, interviews Contemporary artist Tim Rollins (American, b.1955) and Angel Abreu and Rick Savinon, two of the original members of Kids of Survival (K.O.S.). Filmed at the Lehmann Maupin gallery in New York City, this interview focuses on the artists’ latest show, entitled On the Origin, on view at the gallery November 7 through December 28, 2013. Rollins discusses this new series of paintings, which incorporates Charles Darwin’s famous text, On the Origin of Species. In the paintings, a tree-like sketch found in Darwin’s notebook is repeated and layered over text to create the sprawling canvases. The artist’s collaboration with K.O.S. began in the 1980s while teaching at after-school workshops in the South Bronx neighborhood of New York City. Working closely with teenagers labeled with various learning disabilities, Rollins creates collaborative works heavily influenced by art history and literature. Since its inception, the group has exhibited extensively around the world, and Rollins continues to work with students in New York City through the program.