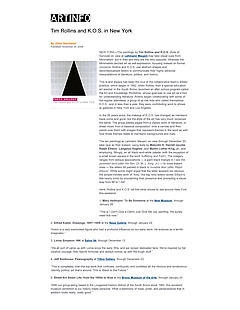 Tim Rollins and K.O.S. in New York
By Jillian Steinhauer

NEW YORK—The paintings by Tim Rollins and K.O.S. (Kids of Survival) on view at Lehmann Maupin may take visual cues from Minimalism, but in their aim they are the very opposite. Whereas the Minimalists decried art as self-expression, focusing instead on formal concerns, Rollins and K.O.S. use abstract shapes and decontextualized letters to communicate their highly personal interpretations of literature, politics, and history.

This is and always has been the crux of the collaborative team's artistic practice, which began in 1982, when Rollins, then a special education art teacher in the South Bronx, launched an after-school program called the Art and Knowledge Workshop, whose goal was to use art as a tool for understanding literature. Rollins began collaborating with some of the regular attendees, a group of at-risk kids who called themselves K.O.S., and in less than a year, they were contributing work to shows at galleries in New York and Los Angeles.

In the 26 years since, the makeup of K.O.S. has changed as members have come and gone, but the style of the art has very much remained the same. The group pastes pages from a classic work of literature, or sheet music from a classical composition, onto a canvas and then paints over them with images that represent themes in the work as well how those themes relate to members' backgrounds and lives.

The ten paintings at Lehmann Maupin, on view through December 20, take race as their subject, using texts by Malcolm X, Harriet Jacobs, Ralph Ellison, Langston Hughes, and Martin Luther King, Jr., and employing, fittingly, an all black-and-white palette (with the exception of a small brown square in the work Suffering and Faith). The imagery ranges from oblique associations — a giant black triangle in I see the promised land (after the Rev. Dr. M. L. King, Jr.) — to more blatant ones — the letters IM painted in black in Invisible Man (after Ralph Ellison). While some might argue that the latter appears too obvious, the simple-minded work of "kids," the big, bold letters render Ellison's title nearly ironic by proclaiming their presence and prompting a visual leap from IM to I AM.

Here, Rollins and K.O.S. list five other shows to see around New York this weekend:
1. Mary Heilmann: To Be Someone at the New Museum, through January 26
"This is 'I Don't Give a Damn Just Give Me Joy' painting. We surely need this now."

2. Alfred Kubin: Drawings, 1897–1909 at the Neue Galerie, through January 29
"Kubin is a very overlooked figure who had a profound influence on our early work. He endures as a terrific imaginator."

3. Lorna Simpson: INK at Salon 94, through December 13
"We all sort of came up with Lorna since the early '80s, and we remain dedicated fans. We're inspired by her creative courage. She rejects formulas and always comes up with the tough stuff."

4. Jeff Sonhouse: Pawnography at Tilton Gallery, through December 23
"This is completely over-the-top work that confuses, confounds, and conflates all the obvious and tendentious 'identity politics' art that's around. This is 'Black to the Future.'"

5. Street Art Street Life: from the 1950s to Now at the Bronx Museum of the Arts, through January 25
"With our group being based in the Longwood historic district of the South Bronx since 1982, this excellent museum exhibition is our history made personal. What a testimony of hope, pride, and perseverance that in addition looks really, really good."