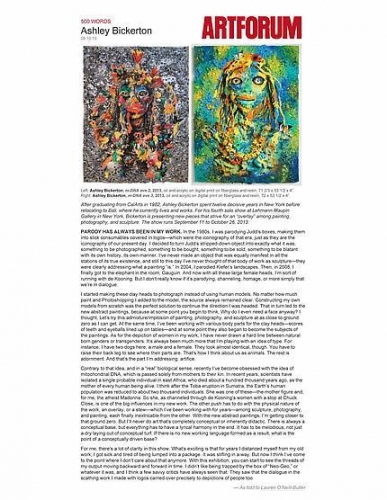 After graduating from CalArts in 1982, Ashley Bickerton spent twelve decisive years in New York before relocating to Bali, where he currently lives and works. For his fourth solo show at Lehmann Maupin Gallery in New York, Bickerton is presenting new pieces that strive for an “overlay” among painting, photography, and sculpture. The show runs September 11 to October 26, 2013.


PARODY HAS ALWAYS BEEN IN MY WORK. In the 1980s, I was parodying Judd’s boxes, making them into slick consumables covered in logos—which were the iconography of that era, just as they are the iconography of our present day. I decided to turn Judd’s stripped-down object into exactly what it was: something to be photographed, something to be bought, something to be sold, something to be blatant with its own history, its own manner. I’ve never made an object that was equally manifest in all the stations of its true existence, and still to this day I’ve never thought of that body of work as sculpture—they were clearly addressing what a painting “is.” In 2004, I parodied Kiefer’s landscapes. Then, in 2008, I finally got to the elephant in the room, Gauguin. And now with all these large female heads, I’m sort of running with de Kooning. But I don’t really know if it’s parodying, channeling, homage, or more simply that we’re in dialogue.

I started making these clay heads to photograph instead of using human models. No matter how much paint and Photoshopping I added to the model, the source always remained clear. Constructing my own models from scratch was the perfect solution to continue the direction I was headed. That in turn led to the new abstract paintings, because at some point you begin to think, Why do I even need a face anyway? I thought, Let’s try this admixture/implosion of painting, photography, and sculpture at as close to ground zero as I can get. At the same time, I’ve been working with various body parts for the clay heads—scores of teeth and eyeballs lined up on tables—and at some point they also began to become the subjects of the paintings. As for the depiction of women in my work, I have never drawn a hard line between natural born genders or transgenders. It’s always been much more that I’m playing with an idea of type. For instance, I have two dogs here, a male and a female. They look almost identical, though. You have to raise their back leg to see where their parts are. That’s how I think about us as animals. The rest is adornment. And that’s the part I’m addressing: artifice.


Contrary to that idea, and in a “real” biological sense, recently I’ve become obsessed with the idea of mitochondrial DNA, which is passed solely from mothers to their kin. In recent years, scientists have isolated a single probable individual in east Africa, who died about a hundred thousand years ago, as the mother of every human being alive. I think after the Toba eruption in Sumatra, the Earth’s human population was reduced to about two thousand individuals. She was one of these—the mother figure and, for me, the atheist Madonna. So she, as channeled through de Kooning’s women with a stop at Chuck Close, is one of the big influences in my new work. The other push has to do with the physical nature of the work, an overlay, or a stew—which I’ve been working with for years—among sculpture, photography, and painting, each finally inextricable from the other. With the new abstract paintings, I’m getting closer to that ground zero. But I’ll never do art that’s completely conceptual or inherently didactic. There is always a conceptual base, but everything has to have a lyrical harmony in the end. It has to be melodious, not just a dry laying out of conceptual turf. If there is no new working language formed as a result, what is the point of a conceptually driven base?

For me, there’s a lot of clarity in this show. What’s exciting is that for years I distanced myself from my old work; I got sick and tired of being lumped into a package. It was stifling in a way. But now I think I’ve come to the point where I don’t care about that anymore. With this exhibition, you can start to see the threads of my output moving backward and forward in time. I didn’t like being trapped by the box of “Neo-Geo,” or whatever it was, and I think a few savvy critics have always seen that: They saw that the dialogue in the scathing work I made with logos carried over precisely to depictions of people too.


— As told to Lauren O’Neill-Butler